One of the things I’ve been doing lately is writing in Wikipedia and Wikibooks articles. My school project has finally fully started though, so I shouldn’t really have much time for that… In any case,
Wikibooks: Jump Superstars (guide) is the article I’ve worked most on, and I’ve also created an article for SCCC. Other than that I’ve written a little on the Jump Superstars and Kirby articles. Oh, and for those of you who doesn’t know what Wikipedia is: It’s an online encyclopedia where everyone can write and edit articles.

Last weekend I went to my brother Vilhelm’s confirmation. The church was completely full! My family had to stand near one of the walls because we arrived too late to get a seat, and I didn’t actually see anything, so I just had to listen. It was also way too warm inside the church, with all the people in there. But other than that, I guess it’s somewhat encouraging to see so many people in the church.

Oh, there is also the fact that I actually missed two lectures in a subject (Design as a creative process) because it was impossible to find any info about it on the internet. I didn’t know that the subject had started before I sent an e-mail to the school asking. You could say that I should’ve done it earlier, but actually I tried sending a message to the subject’s lecturer first. He has never replied, of course. I guess maybe only lecturers in the Computer Engineering courses care about using computers…

Other than that I kind of like the subject. The first two exercises for this subject is to draw a drawing or make a collage for a short story, and to make a perspective drawing based on some flat drawings. Haven’t gotten time to start on those yet, because of the main project for this semester, but I look forward to doing them in the weekend. At least for now… 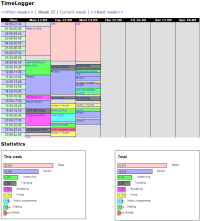 Another thing I’ve been doing lately is to make a script to log what I actually spend time on doing. I have only used it for a few days now, so the statistics aren’t quite representative yet, I guess. The script and the chart it makes is kind of neat, but I’ll have to see if I manage to keep updating it.

Maybe some time I’ll change the horrible design of this website. But, erh, not today.