Beat Mass Effect on Monday, then I got the Bioshock 2 Special Edition in the mail on Tuesday. Perfect timing! Anyways the final parts of Mass Effect was quite good, with cinematics and dramatic (albeit very cliched) stuff happening. After taking almost every single sidequest and getting the best armor and weapons I could for my characters, most enemies died in one or two shots with the shotgun. Hurr hurr. Anyways, some photos of the Bioshock 2 Special Edition: 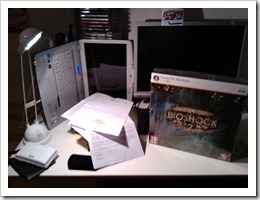 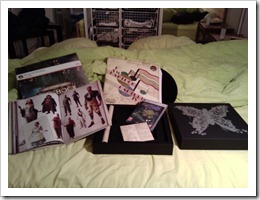 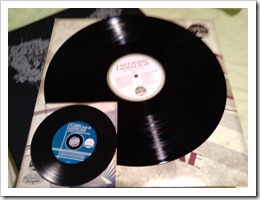 The contents is an art book, a LP, an audio CD with soundtrack from the game, and two posters (that I haven’t opened up and looked at yet). And the game of course. The butterfly thing on the right side is just the lid for the inner box, with some more artwork from the game. The audio CD is also designed to look like a small LP, pretty cool! Although I just ripped the music to my computer and won’t be using the CD. Don’t have a LP player either… maybe I’ll just frame those two and put them on the wall.

The game itself is good too! Love the atmosphere, how everything is designed to look like the 50s, and how you sometimes see people doing various stuff on the other side of a window. Early in the game you pass by a window leaking water, and you see a Big Daddy fixing it up, making the water stop leaking. I guess it doesn’t sound so amazing when describing it… but things like this makes the game surroundings more believable, more alive.

The game is running quite smooth too on my two year old gaming laptop. Admittedly with the resolution turned down to 1440×900, but still with highest settings on other graphical effects. I even feel like it’s running smoother than Bioshock 1… maybe they made the engine more efficient? Or maybe it’s because of newer NVidia drivers? *shrugs* Oh, I also upped my RAM from 2GB to 4GB and put in a new 7200RPM hard drive instead of the old 5400RPM one, I guess that might matter too. Heh. Well it’s quite playable in any case!

I also tried out making jelly and chocolate using the Wii remote and nunchuck packaging: 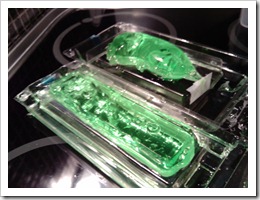 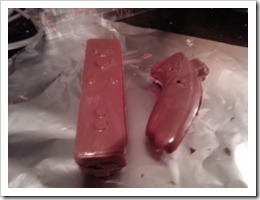 Wasn’t quite as easy as I hoped, and I had some trouble getting both sides to stick well together both on the jelly and on the chocolate… But it was an usable result I guess. Don’t really have anyone to give the chocolate to either… will probably just give it “to the youth group”.

My parents tipped me about some 49NOK IKEA chairs (HAJDEBY), so we went to IKEA and bought two: 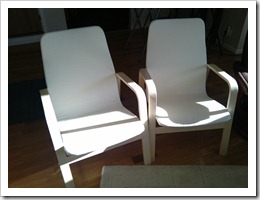 Just for fun I tried to make a time-lapse video of me building it, but the program I used (LapseDroid) didn’t prevent my phone from going into sleep mode while it was taking photos… so it only got the first 10 minutes of the building. So disappointed… At least next time I’ll know to leave it on charging or turn off sleep mode before trying.

Anyways, going to a new years party soon with my family. No dates for Valentine’s day tomorrow. I guess I might just stay home to play Bioshock 2.