I finally got a new blogsite! The main reason I hadn’t moved away from crappy Windows Live Spaces is because I wanted to keep my old blogposts, and there weren’t any way to export my blogposts from their site before. I eventually decided to try just do a mass download of my blogsite, and try to extract text from it into my own hosted WordPress. But while I was doing this, I suddenly noticed a message from Microsoft stating that they were going to shut down Windows Live Spaces next year, and that they had made a deal with WordPress so I could transfer every posts from the Windows Live Spaces blog over to WordPress! They even made a link for downloading my entire blog as a zip file.

So eventually, transferring the blog posts and comments was made a lot easier. I even managed to transfer the blog posts and comments/guestbook from two of my older blogs into WordPress! The biggest problem was to move the photos that I had linked to in my blogposts to my WordPress installation and then make the blogposts link to them correctly, but eventually I got most of it working too. So now, on this site, you can actually read every lame blogpost I’ve written since late 2003. Too bad I’ve lost the even older websites that I’ve made, but those were actually normal websites instead of blogsites, so I guess they wouldn’t have anything resembling blogposts. I remember the first website (?) I made was a jokes website with random jokes.

Anyways, here are some screenshots from my old blogsites: 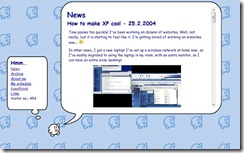 The first “bloglike” website I made. Kirby is cute! 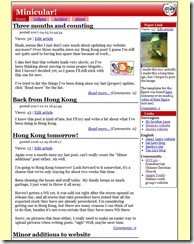 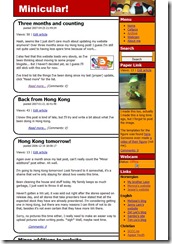 Both of these websites are the same blog, I just changed the design a bit after a while. 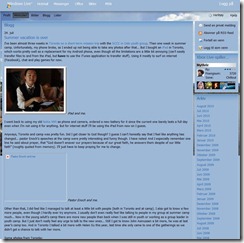 The Windows Live Spaces blog. I changed the Windows Live Spaces theme this year or so, don’t have a screenshot of the old one. The old one was red’ish, like the two previous Minicular! designs I had. But this theme actually has roughly the same colors as the Kirbily website! I didn’t even realize before now.

Anyways the good thing about this WordPress blog is that I’m hosting it myself, so it should be pretty easy to take backups and whatnot. And I can still write blogposts with Windows Live Writer! (Yeah I hope I don’t seem too much like a Microsoft-hater. Using Windows 7 is usually pretty okay, and Live Writer is a pretty good free program. I already wrote about it here, so I won’t go into details this time.

I visited Yann, Joe and Gabriel, and other youth in Stockholm a few weekends ago. Spent most of the weekend playing video games with Yann and Gabriel, was staying at Gabriel’s place. There was a LAN party, but honestly I’m not much of a LAN-party person, and Yann had also gotten sick just before I came, so we didn’t stay at the LAN-party so much. Mostly played various games at Gabriel’s and Yann’s place. Went to church on Sunday, met a few more people there. Oh and Gabriel was kind enough to lend me Wind Waker and Dead Rising, two games that I’ve been wanting to play. 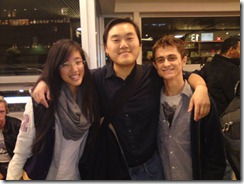 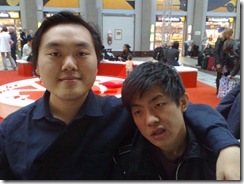 Other than that, I haven’t done anything very special in particular. Still been trying to finish games. Oh yeah, I got my copy of “Metroid: Other M”, and then I played through it in two evenings. The game was way too short! Even though the cinematics were pretty cool, it was really a disappointment that it was so short. I think total playtime was around 12 hours or so. I then played another evening to get 100% item completion. I had to look up 3 of the items on GameFAQs because, uh, I was too tired of not being able to figure out how to get them even though I knew where they were on the map.

I also finally beat Mega Man 9. I spent 3.5 hours last Saturday not being able to beat it. But when I tried it again yesterday, I found that I could easily breeze through the final 4 stages, saving my energy tanks for the final boss. I guess practice really does help. And now I kinda want to buy Mega Man 10. But for now, Wind Waker and then Dead Rising is pretty much next on my playing list. Fallout 1 on PC too I guess… 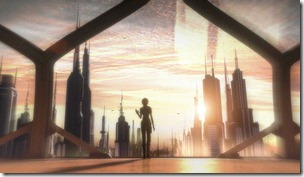 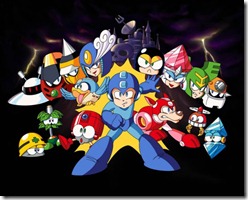 Metroid: Other M was short, but the cutscenes were pretty nice! And Mega Man 9’s bosses were quite easy once I memorized their weaknesses.

Dunno about the categories on this blog, some of them were imported from Windows Live Spaces, but other than that I’ve just left blogposts on “Uncategorized”. Maybe I’ll just make a “Blog” category and then put everything there. *shrugs*