RSS
← What should I write?
How to make XP cool →

For those who haven’t noticed yet: I moved my website over to a new url (johan.tongxun.no) which is easier to remember! Neat or what? Since when I finish school, I won’t get to keep that other website, and besides, that url was too difficult. So this one is better!

It’s been really long since I updated, haven’t it? I guess that must mean I don’t really have that much to write. I was going to write about my dream with the characters from Rurouni Kenshin, but it is really not that interesting. Basically I was a friend of Kenshin and the gang, and I couldn’t catch up with them when they were running somewhere to fight some bad guys. 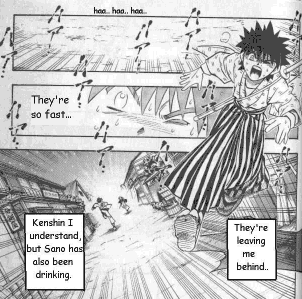 Except I’m the one who’s being left behind, and Yahiko is one of the persons running. And actually Sanosuke is not there, because he’s the bad guy, and he somehow has thunder powers, like Ginji in Get Backers. Hey, it’s a dream, it’s not as it is real life. (Uuuuh…)

Anyhow, this dream could mean one of two things:

Hah, as if! I guess it has to be the third thing: 3. Don’t take dreams too serious. (Although, I will admit that exercise may not be such a bad idea. )

Leave a comment
← What should I write?
How to make XP cool →