I was in MalmÃ¶Â last weekend, met a lot of youth and did some shopping. Bought an electric fan with a water spray, to use on hot days! Not that there are so many of those here in Norway, but I guess I can use it when I have to make an effort and feel too warm. Eh, not that I do that a lot either… Ahum! I also bought some other stuff, which you can read about if you click on “read more”.

When going back from MalmÃ¶Â I bought some coffee candy to see if it will help me stay awake during lectures. Also I bought some underwear, and a mouse mat for 10 SEK. It supposedly has a gel wristrest, but the gel’s too hard and usually blocks mouse movement because the mat isn’t long enough or something… But at least it doesn’t make the mouse pointer suddenly skip around like a terrorstricken bee on the monitor, unlike another mousemat I’ve been using.

Enough about shopping! Well, other than shopping, we had a few youth meetings, with worshipping, games and talks. On Saturday some people went to laserdome, while others just went shopping. I didn’t go to laserdome, since I hadn’t brought any showering equipment, and didn’t want to stink the rest of the trip, so I went shopping instead (and bought that fan I mentioned, plus some batteries for some of my household electronic equipment). Also we ate falafel
wraps. Other than that meal and breakfast, all the meals were chicken, which I don’t particularly mind, although the chicken on Saturday was slightly dry. 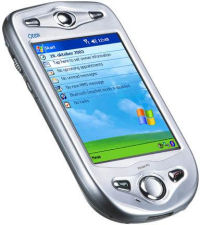 I didn’t take many pictures on this trip, also I didn’t use my digital camera, but my cellphone camera instead. Oh yeah, I’ve been using a Qtek 2020 cellphone lately, because I get to borrow it for my school project. The screen is large so it’s fun to take pictures with the camera, but the quality of the images taken is rather poor. But I can use ScummVM on it to play old point-and-click adventure games, I can use it as a MP3 player, and it’s got a lot of other possibilities, so it’s still kind of fun to use! 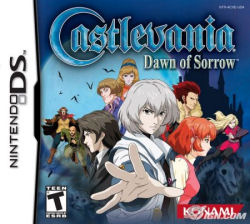 Speaking of games, I recently bought Castlevania: Dawn of Sorrow. Simply put: It’s AWESOME! A little about the game first. The main character in the game is Soma Cruz, and, well, he has to defeat the bad guys, simply put. The story in itself isn’t all that original, so I’ll just leave it at that, and write a bit about the gameplay. 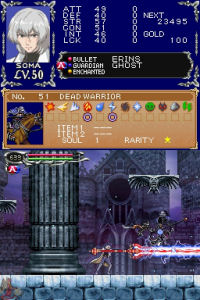 Dawn of Sorrow is a 2D platform action game with some RPG elements. Soma gains experience points for defeating enemies, and will gain levels and gets stronger when he has enough experince points. He can also equip different weapons, armor and accessories, just like any other RPG. The type of weapon used affects the gameplay. Some weapons have more range and are stronger, but will give a longer lag after each attack. Some weapons have shorter range, but can attack more rapidly. Other weapons have very long range, but have lower attack power, and so on.

Soma can also get “souls” from enemies that he defeat. These souls allow him to use special attacks or to get different status boosts, or even give him special abilities like doublejump or transforming into a bat (special abilities are usually gotten from bosses). This, in addition to the changes in gameplay given by the different weapons, gives a lot of possibilites and variations in the gameplay, and it’s quite fun to test out different combinations of special attacks and weapons. The music and graphics in the game are also great! Actually, I noticed that some of the backgrounds in the game are in 3D, although this doesn’t affect the gameplay, which is purely 2D. Kind of neat.

Hmm yeah, now this article is more about that game than about MalmÃ¶, isn’t it… I didn’t even buy the game in MalmÃ¶. Well, I can write that we totally forgot to play chitty-chitty bang bang, that I got the chance to see Yilou and Eva dance (they’ve mentioned it on MSN Messenger), that I didn’t buy any Kesella after all, that I’m still waiting for someone to get a copy of the group picture we took, and that the time we spent in MalmÃ¶Â was entirely too short. I kind of wish I could’ve stayed at the house of someone I knew and spoke Cantonese, though. Since I don’t have a group picture, I’ll just post some other picture I took with Qtek’s photo frame function: 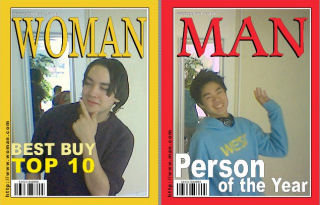