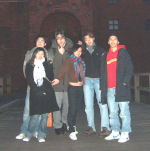 And Merry Christmas too! I wanted to post something for Christmas earlier, but because I’ve been travelling so much this Christmas, I guess I just haven’t been able to take time for doing it. and also I’ve been busy trying to throw out useless junk from the storage room my parents’ house. I am tempted to just light a fire and burn it all, but I’m sure there’s enough plastic junk to heavily poison the surroundings if I did. Anyway, I guess I’ll write a bit about the stuff I’ve been doing for the holidays.

The first few days after my last (and first) exam was mostly spent changing the forum at sccc.no to a new one called PunBB, which is noticably faster than the one we used before, phpBB. I also totally redesigned the front page there. I think the new design is a bit friendlier for new visitors, without too much text.

After going back to Oslo, I must admit most of the time actually went towards playing Nintendo DS. Phoenix Wright is a great adventure style game, where you play a defense lawyer (although the laws in the game aren’t all that close to real life). You have to try to prove your clients innocent by finding inconsistencies in the witnesses testifications, and later also by finding clues in the crime scenes. (I thought that was CSI’s job?)

In Trauma Center you get to cut up and sew people using the stylus. Trauma Center gets insanely difficult after a while, because the game introduces some new kinds of supervirus that moves around as you operate, and zaps the victims health like mad. Phoenix Wright isn’t quite as difficult, although being an adventure game, you might still get stuck in places where you just forgot to click on one specific clue. It is also quite long, mostly because of all the story, which is quite interesting, and the dialogue is funny enough to not be boring.

I haven’t only been playing games though. This year, inspired by the sushi pillow, I decided I wanted to make sushi plushies as Christmas presents. Unfortunately, this took a lot of time, so I ended up making sushi plushies for a few people, and not having any gifts for everyone else. If you complain, I can probably send you a sushi plush on your birthdays instead. Sorry sorry…

The first trip I did was to MalmÃƒÂ¶, where I went with Leon, Enoch and Jimmy. We did a bit of shopping, went to a museum, visited people and watched movies. Second trip was to Glasgow, with both of my brothers, and also Elin and Enoch. In Glasgow we mostly did shopping and eating, although we did see Narnia in the theatres the first day. And we met with a bunch of people.

Actually, to be quite honest, I was somewhat bored in both trips. One thing that I’ve discovered is that I absolutely loathe shopping with other people. Instead of complaining about how people can need clothes that they already have, I’ll just say that it seems I have shopping habits which are totally off from everyone else. Also when I shop with people I feel like I have to hurry all the time when looking at things, because noone else likes to look at the same things I do. So it’s better to shop alone.

Another thing was the fact that I (almost) couldn’t seem to keep a conversation with anyone in MalmÃƒÂ¶ or Glasgow. I could blame it on my bad hearing, which doesn’t seem to be helped much by the hearing aid. I’m pretty sure there’s more to it, though. Either I need new friends, with more similar interests, or I just need more interests. An interesting note is that although I do chat regularly on MSN, I never really have anything interesting to say there either. Maybe I need to take a conversation course or something. Hmm… I guess this would make for a good new years resolution. Along with learning Chinese and do more (or rather, any) workout.

A third reason for being bored would be the fact that there was always someone who stole my DS (Jimmy and Vilhelm), but I guess I didn’t really travel to those places just to play DS anyway… I’ll have plenty of time to play in Trondheim.

Maybe I should make a webpage for keeping track of what I’ve done in each field. Hah! As much as I believe it’ll be “nothing” for most of the time.