I made cream puffs! It wasn’t as hard as I thought, although somehow I managed to fail in whipping the cream, which started turning into butter, I think. So I threw it away and made some vanilla sauce from another recipe.

The recipe I followed was from Krem.no, a website with recipes for different desserts. I halved the recipe though, so my recipe was: 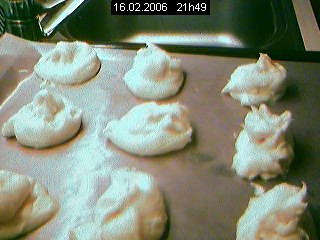 When done, you can put them in the refrigerator untill they are to be served, or you can eat them warm! Fill them with stuff, sweet or salt. Cream is what is usually put in, in any case.

My cream puffs were slightly doughy inside after baking, but I wasn’t sure if they were supposed to be that way. I tried baking a bit longer, but then they just got slightly burned, so I guess maybe they should be doughy.

Either way, they tasted so good I ate half of them right after baking, and the rest of them for breakfast the next day! I didn’t really feel so well after that, which I later realised must’ve been because of the margarine used in the dough. I practically just ate 125g of margarine! And I probably should’ve used less sugar in the vanilla sauce. Blargh. Yeah, so if you feel it’s too much margarine, you can probably try reducing the amount a bit when baking it.