Things I bought in Hong Kong

Oh, here are all my photos from HK. Anyway, mostly for self-reference, these are (most of) the things I bought in HK (excluding food and travel expenses):

Rubber air pump, like the ones used for cleaning camera lenses (or for sucking snot out of noses)

Hmm, the list did turn out to be longer than I expected. A lot of the stuff are cheap small items though… So I guess it’s probably a very boring list.

Whenever I look at the HK photos, these things seem to catch my eyes the most: 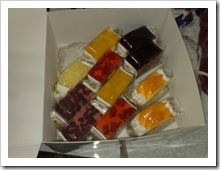 I think I need to find to find a place in Oslo that sells ice cream parfaits/sundaes. Or I should start making it myself. Although that might be dangerous. At least when I have to buy it expensively, that will prevent me from eating it too often…