I originally pre-ordered an Oculus Rift after the consumer version was finally announced, but after reading about all the “controversies” around the launch of the Rift and the Oculus company after it was bought up by Facebook, I eventually ended up cancelling it and buying the HTC Vive instead.

These and the fact that HTC Vive already have motion controllers and also better room-scale support (if you walk around in the room, you are also walking around in the game), eventually convinced me to buy it instead. It even arrived quicker than the estimated delivery date for my Oculus Rift pre-order (was stated to arrive in July). 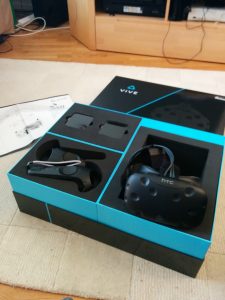 The HTC Vive was developed by Valve in cooperation with HTC, and Steam already had VR support for quite a while, with a decent list of VR games by now. However, most of the games are made by indie developers and it is quite apparent that many of them lack the polish of games from larger companies. It has some similarities to the games found on app stores in the early days of smartphones, a bunch of mediocre games and also some gems, but even among those many are under development (“early access” as Steam calls it). Many of the games are also very arcade-like, without any story or campaign modes, but instead having wave-based level progression, which can be fun too, but is not really my favorite type of games.

I already have 73 games in my VR library (some of them are free demos, but I did buy quite a few during Steam’s summer sale), so I’m not going to go through all of them, but here’s a short list of the games I liked slightly more than others:

A Chair in a Room – Greenwater: One of the more complete VR games, this is a short horror adventure game in the style of old “point and click” adventure games. With jumpscares. I haven’t actually played this game till completion yet since one of my friends finished it when I was demoing VR to some of my friends, and I haven’t really felt like playing it after reaching the first jumpscare parts of the game…

MIND Path to Thalamus: I got this game from a Humble Bundle a while ago, and was happy to see that it got VR support added. It’s also an adventure game, but mostly exploration based, with some slightly physics based puzzles.

Another game in the similar vein is The Solus Project, which is also a mostly exploration-based adventure game, but with some survival elements (you have to eat food, drink water and sleep at regular intervals in order to not die).

The final similar VR game is The Gallery – Episode 1: Call of the Starseed, this one however got enough money through its Kickstarter to feature full voice acting, and while it’s a lot shorter than the previous two, it feels quite a bit more polished. Hopefully they will be able to finish all the episodes of the game.

Portal Stories: VR: A fan-made game in the Portal universe, it is a pretty short game consisting of 10 puzzle stages using a “blinking” device rather than the portal gun. The puzzles are pretty good and it is also voice acted with some dialogue that fits pretty well with the humor in the Portal games. Would’ve loved to see more stages for this game.

These five games are the most “story-rich” VR games of the ones I’ve tried so far, which is why they stand out the most to me.

Other noticable games are:

Currently I’m in my week long home vacation now after summer camp, and decided to just stay home most of the time, doing some chores and binge watching TV and games until I have finished some of the stuff I have been wanting to do but not had time to finish.

One response to “Virtual Reality”