Wow, over a month since last update! What have I been doing for so long? Well, I’ve had some exams in June. Okay, just one exam. After that I went back to Oslo, and then I went to Toronto, Canada for a bit over two weeks with my family (except for father). Everything really is bigger in America! It was impossible to go anywhere without a car, and the food portions also were quite big. We ate a lot of buffets, so I regained the weight that I spent half a year to lose in Trondheim after going to Hong Kong last Christmas…

I met a lot of relatives in Toronto that I didn’t know I had! A bunch of “aunties” and “uncles” that were roughly my age too. We talked about making a family tree, but I haven’t gotten around to do anything about that yet. Haven’t even uploaded the photos from the trip yet, hopefully they’re not waiting too anxiously. I’ll probably get around to it in, like, August.

Lots of things were cheaper in Canada than in Norway besides food. I got a copy of Kirby: Canvas Curse for nearly half the price of what it would’ve cost to buy it in Norway! It’s a great game, where you have to guide Kirby through the game by drawing lines with the stylus for him to follow.

You can also tap on Kirby to make him dash or use special attacks, tap on enemies to stun them, or tap on the surroundings to manipulate the play area, etc. You get medals by finding them in the normal game or winning them in the bonus games, and there are lots of medals to collect before getting 100% in the game, so the game is definitely well worth buying.

Wario Ware Touched! that I bought earlier was actually a bit of a disappointment, because the secrets that you can unlock aren’t really that cool. There are too few two-player games! The first one had a bunch of two-player games that two people could play on the same Gameboy Advance, but Touched! only has one. Oh well…

I haven’t really bought so much in Toronto, besides that game and some DS accessories. I find that it’s difficult for me to do shopping unless I’ve decided beforehand what I want to get. I just take too long time to decide what to buy, and my family seldom stays for long enough at each shop for me to pick something. I’d go shopping alone, weren’t it for the “Canada is big” fact that I mentioned. Amongst the things I bought were some t-shirts, Square 1 (a puzzle which looks and works kind of like Rubik’s cube), and salad tongs (for when I go back to Trondheim). I actually don’t think I bought anything else there… But our relatives gave us a suitcase full of candy and other stuff, so I guess it’s OK. 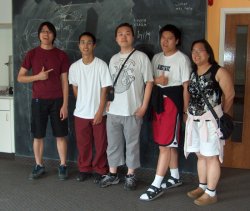 Another remarkable thing in Toronto was how much it was like being in Hong Kong. They even have lots of Chinese malls, which are practically the same as in Hong Kong, except they may be a bit roomier, because Canada is so big. There are also lots of Chinese churches, with their own buildings. I visited Jim Chen’s church, which according to Jim have roughly 3500 people! That’s more than the Summer Camp, maybe even more than all the people in the Chinese churches in the Nordic…?

After coming back to Oslo from Canada I’ve spent almost every day with the youth (or rather, the teens) in our church here. I (and Jimmy (and Elin)) still managed to finish the appreciation cards, nametags and leaders’ image for the Summer Camp though! Elin actually did most of the work for the appreciation cards. Also Andrew spent a lot of time cooking when we were with the youth, he seems to enjoy cooking very much. I haven’t cooked anything since I left Trondheim… Well, not that I’m complaining.

Today the youth (teens) came home to us to make some weird t-shirts. Hmm, maybe I shouldn’t reveal too much now, since it’s supposed to be a surprise. Well, hardly anyone reads this anyway, but I guess I’ll wait with the pictures. Anyway, I’m looking forward to the camp, and I hope it won’t be another month before I update this website, although we’re going to the Netherlands almost right after camp, and I don’t know how long we’re staying there. (I keep forgetting to ask.)