A few weeks ago I came upon a nice little freeware game, called Cave Story (Doukutsu Monogatari in its original Japanese version). It’s a great Metroid-style game with roughly 4 hours playtime, but with enough secrets to make you play through it at least twice.

Click on the screenshot to download the game! If anyone tries this game and needs help with it, feel free to ask for hints.;) Other than that, those who want to know what I’ve been doing lately, can click “Read more” to find out.

I just got home from Oslo a week ago, where I’d spent my week because I didn’t have any lectures, and my first exam wasn’t before May 24th. It was quite fun in Oslo, I spent some time with the youth (or rather, teens) there. We played games, watched a movie, had a youth meeting and played ping pong/tabletennis. Oh, and I won in bowling! Not that it matters much since I just barely got over 100 points. Other than that I’ve also been studying for my first exam. Unfortunately I didn’t think of taking any pictures… Erh, instead I’ll just post a drawing I scanned while I was in Oslo. 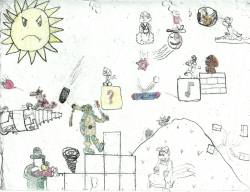 I finished the second of my exams today, leaving only one exam left. Luckily, that one isn’t before June 11th, so I’ll get some time to gather myself a bit, maybe clean the house a little before moving out. Leon and me are moving out of our apartment in Trondheim this summer when we’re going back to Oslo. We’re moving back in to the same apartment in Trondheim after the summer break, but this way we don’t have to pay rent during summer, which is neat.

Ah, I’ve also tried a lot of interesting recipes. Actually, no, I’ve just tried a few interesting recipes, but I haven’t posted all of them here yet, so they’re on my todolist. Just today I made hash browns (potato cakes made of shredded potatoes), although they weren’t too successful. I didn’t take pictures of those either, so a recipe for it would be boring. Hum, maybe when I try making them again…

Lastly, I’ve been programming a bit. One of the things I’ve made is a MP3 Organizer, programmed in Java. The program looks through the playlists I have, and then looks through the MP3s I have, and shows the results in a grid table like in the screenshot. Then I can quickly see which songs are in which playlists, and which songs aren’t in any playlists. It even supports Unicode! It isn’t very configurable though, since I’ve programmed it to work for me. 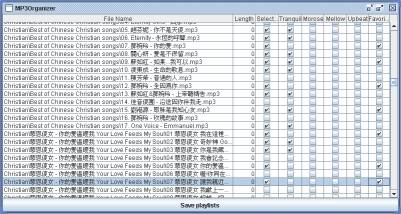 Oh well, I’ll stop boring you now. Maybe I should try posting more often, rather than posting seldomly and with a lot of text…? But nah, noone bothers to read this anyway. Sometimes I’m not even sure if I want people to read this. *shrugs*