More games for you

Flash games are fun! Some of them anyhow. Oh, for those who care, I have completed Castlevania: Dawn of Sorrow in normal mode and Julius mode. Currently playing through hard mode, while waiting for Bomberman DS to arrive. Gotten almost all the souls too! Anyway, click read more for a list of flash games that I found quite good and want you to try, even though some of the games are a bit old.

The Grow series is a simple type of game: You get a list of items that you can put into the game area, and depending on which order you put the items in, you’ll get higher score. To figure out which order the items should be put in, you’ll have to see how each item react to each other, and make sure the items which needs the longest time to grow are put the earliest! The sound effects, graphics and animations also really help making this a good game. Click on the text in the image to go to each game.

Other brainteaser games that I recommend:

Hyperframe is just the old “draw lines between two similar colors without the lines crossing” type of game, but with some kind of simple fancy 3D. The game is set up as a square grid, where some of the squares are colored, with two and two squares having the same color. Your job is to draw a path between the squares which have the same color. The challenge is to draw all the paths without breaking some of the other paths! Clearing all the puzzles was really quite satisfying.
Tork

Tork is a very original adventure game! You are stranded on an alien planet, and you have to figure out how to interact with the people there. The problem is, they talk in a weird symbol language, and you’ll have to figure out what each symbol means! It’s not as difficult as it sounds, since sentences consists of a maximum of 3 symbols, but it’s still a bit of a challenge. It’s been quite some time since I played this game, but it’s really one of the most original adventure flash games I’ve played.
Levers

This is another simple game, where all you have to do is to hang a number of items up on a, erh, lever. The items must not reach the water, however, so after new items come, you may have to move things around quite a bit before getting it to work. And there’s a trick to the last item which may take some time to figure out.
Death in Sakkara
This is a rather new adventure game, and it’s actually not fully finished yet. (Two out of four chapters have been released so far.) The game plays kind of like a comic, with speech bubbles and still images, with short point-and-click adventuring between, and some minigames that you have to win in order to move on. The game is quite well made, the journal that is automatically updated with pictures and text when you find clues is especially neat! Be warned that there are lots of text, so unless you like reading, you won’t like this game much.

Okay, enough about games. I actually have more games I wanted to show, but I guess I’ll save it for later.

Oh yes, I’ve now fully switched to MSN, instead of using Trillian or Miranda. Part of the reason for the switch is that MSN Plus now supports tabbed chatting, meaning I can have only one chat window open no matter how many people I’m actually chatting with on MSN! I can switch between the people in the same window instead of having several windows cluttering my desktop! This is quite a big help for me because my stupid laptop screen doesn’t support a resolution higher than 1024×768. The screenshot below is an example of tabbed chatting, although I’m not really chatting with those people right now, which explains the blank text field. (Although another explanation could be that I removed the text in my image editor.) 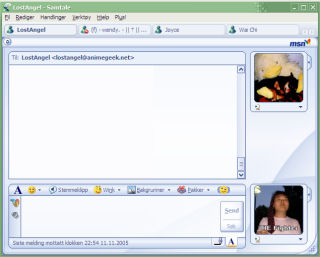 For those of you who have been told that MSN Plus contains spyware: Yes it does, but you don’t need to install it. Basically it shows a screen which asks you to install a “support program” or something like that, and as long as you make sure you select “no”, it won’t be installed. So you just have to actually read the stuff that the installation screen asks you, instead of just clicking next next next. No worries there!

Oh, I also removed the tabs from the contact list window, which is also a problem because of my resolution, and I also removed a bunch of other stuff. I’ll write how in a later post, since the website where the downloads are seems to be down now…

As a last note, I’ll be going to MalmÃƒÂ¶ and Glasgow in December! If nothing goes wrong, that is. Well, so for those who’re in any of those places, I guess I’ll see you there.