Lately I’ve been playing a free MMORPG called Flyff/Fly for fun. It’s quite good for a free game, even though the Engrish in the game is kind of bad (it’s translated from Korean). I’ve been looking for a decent 3D game that doesn’t lag on my computer, so I was happy when I found this game, which only lags slightly when I’ve set all the graphics options to lowest… Some reviews I’ve read said that the game isn’t that good, mainly because of boring grinding and fetch quests, which I guess is somewhat true, although i haven’t found it too boring yet.

I guess I like this game mainly because of it’s graphics (way better than RuneScape, which is another free MMORPG that I’ve tried), it’s anime style, and the fact that most classes are able to level up by themselves without needing to join a party. One thing is that it seems like I don’t really like to socialize much in games either, which is why I usually don’t like MMORPGs, but another thing is that at least in the newbie zone there are way too many people who “tyeps liek tis lolzor”.

I do sometimes party with my brother Vilhelm though (as in join a party and killing monsters together, sharing experience points and loot), and I’ve tried partying with some other people, but I still prefer playing by myself at least for now. Oh, and of course, flying is kind of fun too! It’s neat to soar over the fields or landing in one of the flying rocks in the sky and and enjoying the view of the people, monsters and surroundings from above. And of course, the game being free also helps a lot! 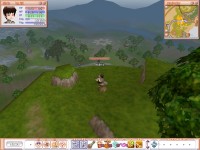 As for the bad points mentioned in the intro, it is true that the game offers little variation in gameplay. Almost all quests are fetch quests where you have to get a certain number of items from monsters, and in most cases the chance for the items you need to drop when you kill a monster seems to be quite low. The only quests that aren’t like this are the other type of fetch quests, where you have to bring items from one NPC to another. And if you’ve done too much leveling up before taking the quests, you may have to fight weaker enemies for the quests, giving little or no experience, making the quest even more boring. To avoid this I try to always do each quest as soon as they are available though, so I can level up at the same time. 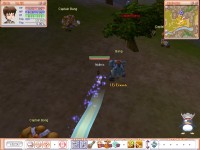 Another thing that was mentioned in a review is that it takes too long before you can change class or be able to fly. For the class change you have to be level 15, and for flying you must be level 20. I didn’t really find this too annoying though, since it made it more fun to level up, as every level brought you closer to these goals. I’ve gotten to level 20, so I’ve reached those goals already, and my choice of class was Acrobat. Once I read about Acrobats being able to fight with Yoyos, I decided that it was the class I wanted! (They can also use bows, but they are just too ordinary in MMORPGs and games in general, so I didn’t want to use that.) So now my goal in the game is to level up my skills, plus leveling up my character to be able to use new skills and/or equipment! There’s also a second class change at level 60, but I’m not worrying about that too much yet… 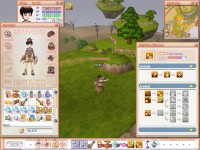 I guess those of you who have experience with more popular and commercial MMORPGs will probably find this game boring because of these points though. Actually it’s quite possible that I’ll get tired of it too, just like I’ve gotten tired of another game that I wrote about earlier *cough*Animal Crossing*cough*. But for now I’m still quite addicted to it, playing untill late at night! So, if you by any chance play this game, or start playing it, feel free to add me to your contact list in the game. My character name is Mythrix. Oh, I have to be logged into the game for it to work though… Well, message me on MSN beforehand or something, I guess.

…I have been working on my University project too, of course.

Oh, last thing, I made a small game in a one hour++ competition. It’s quite bad, but I’ll link it anyway. It’s a strategy game where you use the mouse. It should be somewhat self-explanatory if you’ve played similar games like Advance Wars. I think.

PS: Some hints for people starting in the game. Your stats are reset when you change class. So even if you want to be a Magician, you don’t need to up your intelligence when you’re a Vagrant, as you can change the stats after changing class. Also, do not keep leveling up if you want to do quests, make sure you’ve done all the quests you can at your level to avoid having to fight weaker enemies if you do the quests later. Of course, I guess you could possibly just skip doing quests, if you like…

2 responses to “Fly for fun”