RSS
← One year more, uh, mature!
Photos from Sichuan, also a webcomic about the earthquake →

Been busy lately, I reformatted my laptop and installed XP on it. It feels a lot less sluggish now! It’s hard to understand why Vista lags so incredibly much doing even simple tasks like opening “My Computer” or using Launchy, which is supposed to be a superfast program launcher. (It is superfast now that I have XP instead of Vista.) But now I have to reinstall and configure all my programs, which is quite a bit of work. I thought I had copied all my program settings, but apparently some of them were lost…

At least it gave me a chance to clean up some stuff, like my address book. Luckily I had a backup of my Thunderbird address book, so I merged it with the contacts that I had already imported into GMail, had to clean out duplicates and make sure the addresses and phone numbers were put in the right fields.

Here’s a screenshot of my current desktop: 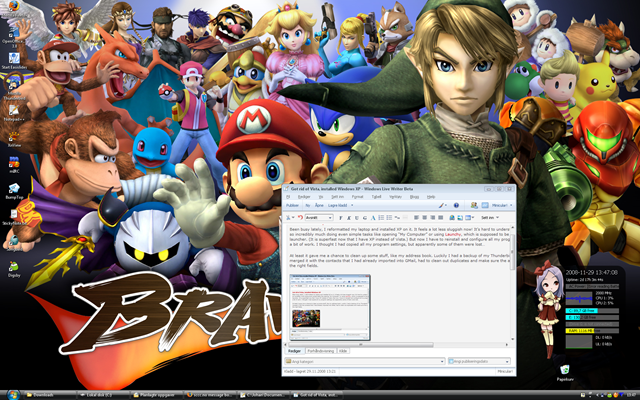 I actually installed a Vista theme on it, which is why the taskbar looks like Vista. The wallpaper is supposed to change daily, but the scheduled tasks in XP is actually not as good as in Vista, because it won’t run tasks that were missed because my computer was off. (Note that the only reason I dislike Vista is because it’s slow. I actually kind of liked the functionality and even the graphical changes in Vista…) Also I usually don’t use desktop icons (since I use Launchy anyway), but I kept a few icons to test BumpTop.

BumpTop is kind of interesting, but entirely useless, at least to me. It might be somewhat useful for people who has tons of documents and actual use visual cues to recognize them, but I actually don’t have that many documents, and I usually prefer looking them up using their file names. Keyboard navigation is better for your hands too, I’m pretty sure using the keyboard more is part of the reason I don’t get as much trouble with my arm as other computer users do.

I guess I’ll get back to the computer configuration. I think I’ve installed most of the things I use every day by now at least.

Leave a comment
← One year more, uh, mature!
Photos from Sichuan, also a webcomic about the earthquake →