Been playing around with the facial recognition feature in Picasa 3.5 the last two days. It’s great fun! I’ve thought about tagging my photos or something to make it easier to look up older photos of people, but this feature definitely makes it a lot easier. So far, the facial recognition part seems pretty solid: I’ve only seen two matches so far that weren’t actual faces. There’s the problem of faces not getting recognized as faces though, but I’m not sure how bad this is since Picasa is still only 29% through the scanning, even though I left it on all night yesterday… 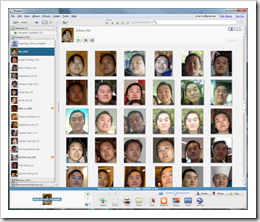 Then there’s the face grouping feature, which groups similar faces together. When you tag a group of photos with a name, they’ll be put in that person’s folder, and you can easily find photos of specific people. The website says you’re supposed to be able to find photos with two or more people that you specify, but I haven’t quite figured out how this is supposed to work yet… You can also make different types of photo montages, which should be great for making gifts/cards to people. Or making wallpapers of the girl/boy you’re stalking, if you’re into that kind of thing. 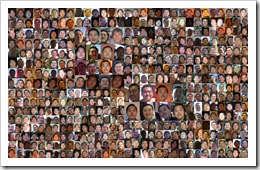 It’s a me! Use this as your wallpaper if you want. No, actually, please don’t.

As you tag more faces into a person’s album, Picasa will get better at recognizing this person. It’s pretty cool! But of course, the program won’t be able to get things 100% correct. Some minor difficulties I’ve found while playing with this program:

Still, even with those issues, it’s really cool whenever Picasa adds a bunch of (correct) photos to a person’s album! For a couple of the people I think I’ve tagged 20-30 or so photos manually, and then Picasa has automatically suggested 100+ correct photos, so I can just select them and choose “Confirm”! It’s almost like a kick! In fact, I feel like I’m almost addicted to tagging photos now… just have to tag a few more photos…

On a sidenote, I better make sure the Picasa database is being backuped, so I can keep the tags even if something bad happens to the computer. *sigh*

Ugh, need to pull myself away from the photo tagging and get myself to bed. Work tomorrow… *sigh*

Leave a comment
← Bento!
A sunny day in Bergen →