Happy birthday to me!

It’s my birthday today! Ended up not having any party, but I celebrated with my family on Friday and kinda on Saturday and Sunday too, so it was nice. Got a nice coat from my mother, and Wii Fit Plus from Leon! 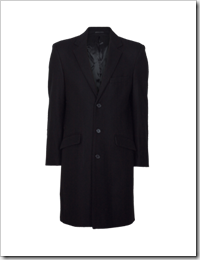 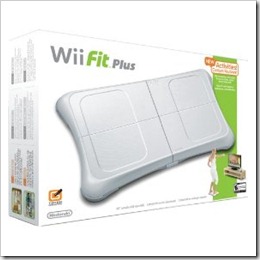 Wii Fit Plus is just the same game, but with more minigames. It’s pretty fun! And once I get it transported back to my apartment, I might use it to track my weight… Right now I’m just tracking it in some Excel sheets (but with graphs showing me how much I have not improved at all!)

Last week I got the DPT vaccine shot for diphtheria, pertussis and tetanus, and the Twinrix vaccine shot for hepatitis A and B. Made my arm hurt for a few days, but nothing serious. Got it because we might be going to Malaysia (from Hong Kong) in Christmas! Couldn’t get the swine flu vaccine, apparently there aren’t enough vaccines in Norway. Pretty crazy. But I’m not too worried, since they say the swine flu still isn’t really a lot more dangerous than a normal flu.

Had a family party last weekend, played some XBox 360 games with Misin and Douglas. Played some brain training multiplayer game, it was pretty fun, don’t remember the name though. Then we played some Mario Party 8 on the Wii! And some Borderlands, although that was mostly me and Vilhelm playing. I don’t really like playing normal XBox 360 games on their 26″ TV though, can’t even read the text properly… They need a new TV! Maybe I should just buy them one for Christmas, although there’d still be the problem of having enough space to put a larger TV. And the fact that I need to start paying back on my house loan soon. And that I’ll probably spend at least some money in Hong Kong. Ah well, I’ll think about it later.

Moved the furniture around a bit in my bedroom in the beginning of this week. Originally I did it because I wanted to set up a wall heater that came with the house. But I couldn’t find the metal rack for hanging up the oven. =/ I got a heater on wheels from my parents instead though, so I don’t have to search around to find a matching metal rack. But I still left the room like it was after I moved things around. Now I almost got a bit more space for my chair to roll away from the desk! (Except the drawer on the right still blocks it a little.) 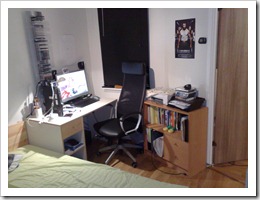 Also visited my IT-boss/coworkers apartment. Had pizza and apple pie/cake! He had a cool desk that he could lift and lower using a button, so he could stand and use the computer when he doesn’t feel like sitting. I should probably get something similar so I don’t sit so much all the time at home… He also had a monster PC that was about twice the size of a normal tower PC! I want too! Then maybe I could use a higher resolution on my newly bought PC games!

I already finished Mirror’s Edge, it was pretty short. But it was fun while it lasted! Except when I had to play through the same places 10-20 times because I kept getting shot to death or falling down and dieing on a difficult jump. Don’t think I’m gonna bother with the time trial, I’ve got other games to play. I think I’ll go play a bit more on Mass Effect before going to bed today. 😀

2 responses to “Happy birthday to me!”