Since last post I’ve finished a bunch of games. 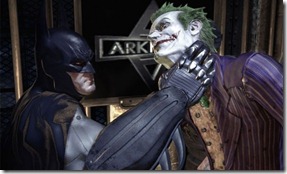 Batman: Arkham Asylum – There weren’t so many of Batman’s enemies actually in the game, though character profiles for many of his enemies are unlockable by solving Riddler’s puzzles and finding his hidden trophies. I actually found all the secrets before beating the game! The fact that some of the secret hidden items are maps that show where all the other secrets are, really made it easier. Otherwise I probably wouldn’t have bothered. 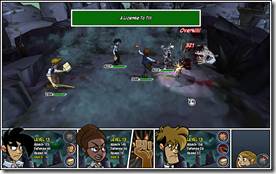 Penny Arcade Adventures: On The Rain-Slick Precipice of Darkness – Episode One And Two – Somewhat enjoyable, though the humor is a bit hit-and-miss. Still, too bad that they discontinued the game, it was supposed to be four games in total I think. It was kind of interesting that you could create your own character and have that character carry through through all episodes, interacting with characters from their web comic (which also has some hit-and-miss humor, but I still keep reading the comic). 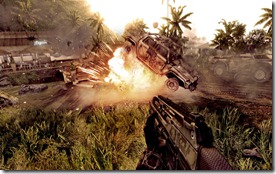 Crysis and Crysis: Warhead – I like the fact that for once, regenerating health is actually explained (because the main characters use advanced nanosuits that self-repair and apparently have infinitely self-refillable energy). And the various superpowers that the suit give are nice to have, though I weren’t particularly good at using them while fighting enemies. Stealing the enemies’ vehicles and then shooting them from inside said vehicles was usually more effective. Just had to make sure I got out of them before they exploded. (I’m sure the vehicles aren’t supposed to explode when the enemies are just shooting at it with guns, but whatever.)

Oh, my laptop overheated when playing the Crysis games! I had to turn all settings down to low to prevent overheating, but with Crysis: Warhead it would overheat anyway. Just having my laptop overheat and shutdown didn’t bother me that much, but the biggest problem was that the game sometimes stopped working after the laptop shutdown from overheating, forcing me to uninstall and reinstall the game for it to work again! I ended up buying the Coolermaster NotePal Ergostand to help cooling the laptop down. Seems to work, Warhead didn’t overheat my laptop once after I started using this. 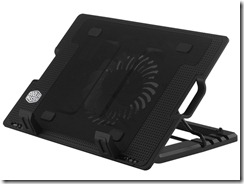 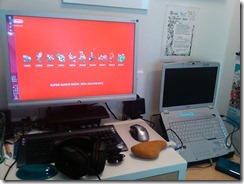 I picked this notebook cooler over various others because many of the other notebook coolers didn’t have adjustable stands. With this one I could raise the laptop higher, so I can use the laptop screen as additional screen estate if I want. Without having to prop the laptop up with books or whatever I find in my apartment, I mean. Also this cooler has a 4-port USB hub. So it’s almost like a docking station! (Although I almost never take my laptop with me anywhere anymore, the iPad works quite well as a substitute. So it’s not as if I need a docking station, I mean.)

In the photo you can see the 3DS resting in its docking cradle. I must admit I haven’t played much on the 3DS since there just aren’t any good games out yet. But I like taking 3D photos with it!

I made Mississippi mud pie for my brother’s birthday!

Me and Elin tried to use up all the letters in Bananagrams.

I found a great utility called StereoPhoto Maker which can batch convert the 3D photos (.MPO files) into side-by-side JPEG files (like the one above here) or into red/cyan images if you want. (Though I haven’t tried that since I figured most of my friends probably don’t have a pair of red/cyan 3D glasses available.)

In the photo of my laptop stand you can also see something else I bought recently, a Logitech G35 Surround Sound Headset. Can’t say I’m overly impressed by the simulated surround, I felt that it was hard to hear whether sounds were coming from behind me or not when playing Crysis, though left and right was (not surprisingly) easier to distinguish. Nevertheless, the headset definitely gives better sound quality than the cheap headsets I usually buy! So I don’t think I’m going to try and exchange it to try and get a "better" surround headset. I guess there’s no guarantee another surround headset would work better for me anyhows. 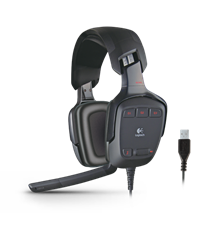 Also, even though my new policy is to not buy any games unless they are games that I have really looked forward to getting, I ended up buying the third Humble Bundle. The game I mainly bought the bundle for is Trine, which is a platform game slightly resembling the old Lost Vikings, but less puzzley and more actiony. Also I bought the bundle to support the Finnish developer company (Frozenbyte) which made the games in this bundle. (Finland is right next to Norway!) And to support charities. Well anyways, Trine will probably be the next game on my playing list. Haven’t tried the Shadowgrounds games yet, but they seem to be a bit like the old (ancient!) Alien Breed: Tower Assault game that I tried a long time ago! I kind of liked Tower Assault, but I think I kept dying on the first stage so I gave up playing it.

Oh, I also bought lots of other stuff online, in particular I bought a pair of shoes: 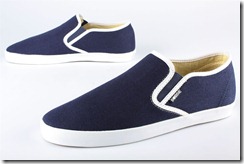 It was only because I got a coupon for that webstore! I’ve now got 9 or so pairs of shoes in my apartment. Way too many. I will never buy more shoes unless I throw away some of my old ones!

Aaaaand that will be all for today. I should clean my room. Maybe tomorrow. *sigh*