December and 2012 is almost over! This Christmas I ended up staying behind in Oslo while most of my family went travelling. The biggest reason is that I wanted for once to have a real vacation, without having to force myself to talk with other people, which is actually really tiresome for me. I’ve mostly stayed at home playing video games and watching Netflix. Since I usually eat dinner with my family once a week, I don’t really miss them that much. Vilhelm stayed over a few days, but went back home earlier today.

Mid-December I went to Bergen to join their Christmas party, we sang a Christmas song and had games with the youth there. Had an enjoyable time! I didn’t manage to take any good pictures. Need to practice more using my phone camera… 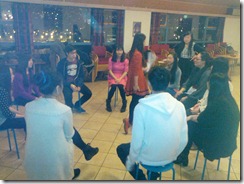 Lorna and Patrick invited us for dinner, it was nice seeing them again and playing with their kid, Celina. She was a bit over a year old if I remember correctly. I was tricking her with a “laser” pen, she didn’t seem to be overly amused because she was looking at me with a rather accusing look on her face whenever I moved the laser away from her!

I’m glad they had those ads about testing the smoke detectors at home, because when I had a look at mine, I found out that they didn’t even have batteries! I guess the one who rented my apartment before must have removed the batteries…? Why would she do that without buying new ones?? Was she burning her food all the time? Oh well, I bought new batteries in any case… Ended up buying quite expensive batteries compared to the ones at IKEA, but I was too lazy to look in lots of stores and figured I’d better buy it quickly. In case a fire starts.

Anyways, once vacation started (and my family left on their travels), I’ve mostly locked myself at home playing games. I’ll list the games I’ve finished since my last blog post and some brief comments about each of them:

Virtue’s Last Reward (Zero Escape) – Loved this game! There are so many plot twists and mysteries in the game that even if you manage to guess some of them, you probably won’t be able to guess all of them! Getting to the final ending to see all the explanations for the mysteries was quite satisfying.

Darksiders – I definitely can see the reason why people say this game reminds them of Zelda: The dungeon designs where you have to solve puzzles to get access to different parts of the dungeons, the items which allows you to access new parts of the world/game map, and the dungeon bosses which require you to use those items to defeat them. I wouldn’t go so far as to call it a rip-off though – if anything I’d call it a homage! All that asides, the game is pretty much what I tend to call “a generic button-masher action game”. The story did have some kind of plot twist, but was still quite bland. The Zelda elements/puzzles made the game more enjoyable, but I felt that some of the action segments dragged on for too long. It was an all right game, but I feel no urge to get the sequel.

Ever 17: The Out of Infinity – After finishing Virtue’s Last Reward, I read in some forum that the writer for that game, Takumi Nakazawa, also made this game. Unlike VLR, Ever17 is a pure visual novel, meaning besides a few dialogue options, there is no actual traditional gameplay. You just read through tons of dialogue. There isn’t much graphics either, most of the game you’ll be in around 20 rooms or so each with a single image, with the character images on top of it. They don’t have animations either, but do have different moods. Sometimes there might be still images of “cutscenes”.

The story, however, was really as great as I was told! It’s kind of a “mystery story” like 999 and VLR, and you will hardly be able to guess everything before you get to the explanations given in the final ending. While the game still has some “dating sim” feel to it (which made me somewhat skeptical to playing it at first), it didn’t detract too much from the mystery part of the game. Seriously though, I can’t even watch the opening without thinking it seems like a “dating sim”:

Anyways, I ended up buying the game via a Japanese download shop and then downloading the English version via torrent since the English box version of the game is hard to find… It’s a good game if you like anime/manga, mystery stories and don’t mind reading lots of text on a computer screen.

Assassin’s Creed: Brotherhood – I kind of like the Assassin’s Creed games, but there are just too many “side missions”! Still an enjoyable game though. I eventually managed to get myself to stop doing missions and finish the game. Although I did buy/upgrade all the shops and landmarks. And at least get the ten “Truth” puzzles. Also the Armor of Brutus. *sigh*

Uncharted: Drake’s Fortune – Managed to finish this game in one day! I do like the voice acting and dialogue in this game, it really is like watching an action adventure movie. I really suck at the shooting part of this game though. I did play on easy, but I also activated “Fast motion” mode so I could play the game quicker, which really sped up the game, especially on the climbing parts of the game. But it probably made the shooting parts harder since all the enemies moved faster. Had to turn it off on the last few chapters in the game.

Still a few days left of my vacation, I’m considering whether I want to play more short games like Uncharted or start on some of the longer games on my list, like Borderlands, Final Fantasy XIII-2 or Fallout 3. Might want to finish the StarCraft II campaign too I guess.

One response to “Party in Bergen, Christmas gaming”