Went to Genki last weekend. It was decent fun, although I didn’t really know so many people there and most of the people I knew were working.

Most of the time I spent playing board games with Jocke and the other people I knew.

Puzzle Strike again. I don’t think I won even once during Genki, now that I think about it. Did I?

But I did get to talk with a few new people, though not for that long. I had to work on Friday so I missed most of the first day. Oh I met Tizian for the first time in a few years, since he hasn’t been to camps. He was actually the first one I saw at Genki, I randomly met him outside when I arrived! So he showed me where my other friends were inside. 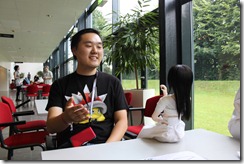 One of my new friends at Genki.

And I got to listen to a concert with Yukie Dong singing Japanese songs, some from anime that I’ve seen. It was fun! And some of the songs that I hadn’t heard before really stuck to my head. To be honest I didn’t even know who she was before I went to Genki. But it was fun seeing her dancing and singing Japanese songs! According to her website she’s born in Beijing as a branch of a royal family from the Qing Dynasty. And she’s an engineer (chemical and material)! And an anime fan obviously. So cool, haha! 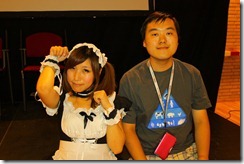 I didn’t really take so many photos of the other cosplayers since I’m too afraid to ask random people to let me take photos of them. But this site has lots of photos, taken/owned by Sascha Nielsen (whom I don’t really know, just saw the link on Facebook).

My biggest regret was not taking a photo of the girl cosplaying as Chell. She had a portal gun replica! With shiny lights! I should’ve asked for a photo… Haven’t seen her in other people’s albums from Genki either yet.

After Genki me and Andrew went to Copenhagen to eat Chinese food, since Roskilde didn’t really have so many good restaurants. We ate dim sum at a restaurant, and then bought some takeaway at another one to eat at the airport. The dim sum was good! But the takeaway was not quite as good, some of my roasted meat seemed a little burnt. Oh well.

Drunken chicken at the dim sum restaurant. For some reason my 3DS messed up the colors on the left photo.

Watched Super 8 on Tuesday, it was a decent movie. There’s a lot more action than you might expect from something which might seem as a children movie (because of the young main characters). And it’s not really a horror movie even though some people might get that impression from the trailer. I’d say the movie is kind of like a mix between (Movie name intentionally left out to avoid spoilers. Click at your own risk!) and Jurassic Park.

Will be having a barbeque today with some friends. Spent last night and most of today cleaning the apartment. Where does all the dust come from! If only they would stay away! *sigh*