Oh, happy Norwegian National day! For this occasion, here is a video that my brother Leon made last year for our Toronto Missions Training trip:

Lately I’ve been working on making my own Android game. I used to program a bit on games before, last game project I made seems to be about 5 years ago. I hardly ever made any actual full games though. I tried running some of them, they still work! But lots of bugs, since I never got myself to finish making any of those games. Hopefully I can get myself to keep working on this new project. Also my old games have horrible balance, some of the game features are so complex (or buggy) that even I have no idea what I’m doing! But the core of each game is decent fun I guess. I may upload my old games to my blog some time.

Anyways, often when talking with people about why I prefer an Android phone rather than iPhone, one of the things I usually admit is that the app store on the iPhone (iTunes App Store) is still better than the one on Android phones (Android Market). There are more quality games for iPhone (and iPad, which I actually do own, because I bought it last summer back when the only Android tablet was the Galaxy Tab). The other thing I admit is that the user interface on iPhone and iPad does often feel smoother than on Android. Apparently, even on newer Android phone, there still is a noticable amount of lag when moving around in the user interface. Granted, even my iPad does lag from time to time, but in general it feels like it does that a lot less than my Android phone. (My Android phone is only half a year “older” than my iPad, so it’s not an outdated phone by that much.)

Still, there are lots of games available on Android phones now, so surely some of them must be good ones! Is what I’m wondering. I do see that there are a few JRPG-looking games on the market, but I haven’t tried any of those yet, even though I downloaded a few. One of the biggest problem I have with Android games is that the touchscreen on my Acer Liquid sucks, it doesn’t support proper multitouch! So games with touch-screen controls just won’t work well because running while jumping won’t necessarily work properly. But even on the iPad, I just find touch controls being difficult because I can’t feel where the buttons are, so sometimes I end up moving my thumb a bit too far and missing the buttons! But games that are controlled by “single touch” or tapping are okay.

Here is a list of games that I’ve downloaded on my Android phone and that I enjoy playing from time to time:

Back when I had a Palm PDA (I think I had the m105), I had a game called Space Trader (oh, that game still has a live website, cool!), which was the game I remember best on the Palm. You are essentially a space captain who has to make a living by buying and selling various goods across space, by doing missions, and/or by attacking other space ships (attacking space pirates if you want to be a good guy, and attacking other traders if you want to be a bad guy). You can then use the cash to upgrade your space ship or buy better ships, in order to make more money.

This game, Star Traders RPG, is pretty much the same kind of game, although it is a lot more complex than Space Trader. For one thing, politics makes a noticable impact on your actions’ consequences: If two of the factions in the game start a trade embargo, just trading with one of the factions will make you lose reputation with the other faction! I actually ended up as a “Crime lord” with one faction just because of trade embargos and how I kept forgetting to check the faction conflicts. Other than that, there also seems to be a bit more statistics that you have to keep track of. Both your captain and your ship has various stats that you can upgrade. For the captain you get stats that can give you cheaper prices when buying, make his piloting and fighting skills better, etc. For the ship you can get more cargo space, better armor, more weapon ammo and similar things.

I’m currently playing on Normal mode, which actually prevents my captain from dying. Whenever he would’ve died, I can instead make a lucky escape, and the only drawback is that I lose all my cargo and that my ship usually is pretty broken and need repairs. Doesn’t seem like I lose any cash either.

I kind of like these kind of games, but the game is heavily text-based, so it might not be for everyone. This is not an action game in any way! Even battles are just text-based (though there are pictures of the ships involved in battle and explosion animations). I guess if you like strategy games like Sim City, where you have to keep track of various statistics as you play, you might like this game.

Androminion is an Android version of the board/card game Dominion, with cards from the first game and the two first expansions (Intrigue and Seaside). The game doesn’t have any of the graphics from the cards (since they would be copyrighted), and it doesn’t have any multiplayer option yet. But the game’s AIs are quite good, so playing against them is a fun challenge! If you want to play a quick game of Dominion this is a great option, since the AI players are a lot quicker than human players, so games usually end faster than when playing the actual card game against other humans. Note that the game doesn’t save the progress, so if you quit a game midways through, you’ll have to start a new game next time.

This is a great Zuma-like game, where you have to shoot bubbles at a moving line of bubbles, and match up three of the same color to pop them. The difficulty gets pretty tough in the later stages! I still haven’t beat this game, partly because I’ve lost the progress a few times from reflashing my phone and getting it broken.

Fling is a pretty simple puzzle game, where you have to drag a ball to make it go in one direction untill it hits another ball and pushes it away from the board. You have to make sure that in the end only one ball is left! Tons of stages and various difficulty levels to makes it possible to find a difficulty level that suits you. Great for a quick puzzle during breaks. The developer of this game, mToy also has a few other puzzle games that have tons of stages and also are great for playing a stage or two during a break!

A free Bejeweled clone, I guess this hardly needs any explanation. 🙂 Has a normal mode (ends when no more moves are possible) and a timed mode (ends when timer runs out).

A puzzle game that reminds a lot of Bejeweled, you get a hexagonal grid filled with balls that you have to rotate around to match up three or more of the same color in a row in order to pop them. 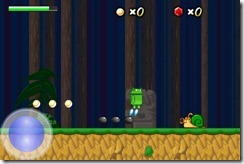 A platforming game where you play as the Android maskot, running (gliding) and jumping around, stomping on enemies and collecting pearls and gems. And uncover a hidden plot! Probably. Haven’t played past the first few stages yet. This game supports tilt controls (with onscreen buttons for jumping/flying and attacking), so it’s playable even on my phone!

I have actually played a few of the Townsmen games on my Nokia phones, seem to remember that they were fun to play. So I installed the free version of the 6th one. But I haven’t gotten around to playing it much yet. Anyways it’s a city-building game where you have to grow the population of your city by building various buildings for gathering wood, gathering food, making metal and tools and then building more houses to allow for more people to join your city. (Roughly, it’s been a while since I played the games.) Well since it’s got a free version there’s no reason not to try it.

From the game’s name you might think that this is some kind of Plants vs Zombies clone, but it’s a completely different type of game. In this game, you have to “shoot” monsters by grouping together three or more pumpkins of the same color on the bottom screen, and then flick them upwards to shoot them as projectiles. It was surprisingly fun! Though I haven’t played more than the first stages. I’m assuming that as the game progresses, you’ll face different types of monsters (otherwise the game would get boring quickly).

Agh, spent too much time writing the blog post and surfing the web, didn’t get to do any programming on my game today. Time to go to my parents for a barbeque too. I really want to finish making a demo of my Android game during this week, just because that’s what I decided that I wanted to do… Ah well, we’ll see.