I got my Sluggy Freelance Megatome 01 book! You can read almost all of it for free online so there’s no real need to buy the book. I did it partly to support the comic artist, and partly because I liked the story and the jokes, so I wanted to reread the comic from the beginning. And doing it in book form is a bit better than doing it on the screen again, or so I figured. 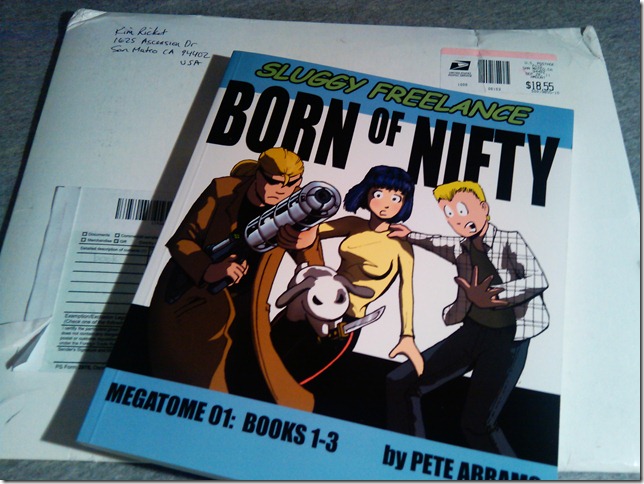 I also preordered a book from another webcomic that I recently started reading and liked, Edmund Finney’s Quest to Find the Meaning of Life, and I donated some money to Sandra and Woo. Yeah, I seem to keep throwing money around to support people/companies that I like. Other preorders I did include the Collector’s Edition of Legend of Zelda: Skyward Sword and the Collector’s Edition of Batman: Arkham City.

Now that I think about it, I also applied as a monthly donator for Røde Kors (Red Cross in Norway), but I haven’t gotten anything in the mail from them yet. I’m sure it’s been a few weeks since I applied. I guess they don’t have the manpower to go through requests quickly?

Oh, and I also bought/donated to the Humble Frozen Synapse Bundle, which at first only included Frozen Synapse, but now added two other games, Trauma and SpaceChem. (It also includes the previous Humble Bundle with Frozenbyte games if you give more than the average, currently 4.67USD. I already got that bundle when it was running though.) Both Frozen Synapse and SpaceChem are puzzle/strategy kind of games which seem simple enough through the tutorial, but which explodes with difficulty already in the first stages. (I might be exaggerating.) I did beat my brother twice in Frozen Synapse, though he hadn’t even played the tutorial yet so I’m not overly proud over that.

Trauma however is a simple point and click game a lot like many online flash games, although with a somewhat more serious story about a car accident victim. And life. I kind of like the mood in that game. The game is pretty short, but I haven’t found all the secrets yet. Might do that in the weekend. Anyways, the bundle is at the moment of writing still running for 7 more days, so you should get it while you have the chance!

Here’s a video of my solution in one of the stages in SpaceChem. Later I found out that I don’t really need to have the same shape on the molecules for them to be accepted, as long as the bonds were correct. Oh well.