Look at what I’ve made last weekend! 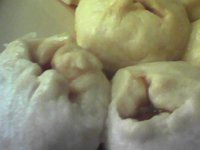 I like to experiment with cooking, especially in the weekends. A few weeks ago I made pizza. Not frozen pizza, but a pizza from scratch, dough and everything! Not that it’s that difficult. I made it with lamb meat, champignon and onion. Erh, the pizza that is, not the cha siu bao.

For those who’re interested, here’s roughly the recipe I used (freely converted from a recipe I found with Google):

The original recipe was somewhat different, but I changed it a bit, because I didn’t have milk, and I didn’t have all the ingredients for the filling, so I just made something more or less randomly. Other than that, I mostly did what the recipe described. 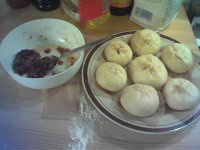 Some things I noticed:

So, there you have it. Maybe I’ll try to make something else some other time. Dan tat! Not sure if that isn’t too difficult to make, though. I guess I’ll just look up a recipe and see how it looks.