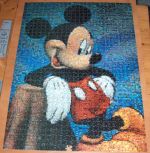 Hey, sorry that I haven’t updated in a while. Part of the reason is that I’ve been trying to focus on my Universtiy project, and the other part is that even when I’m not able to focus on it, I spend my time doing other things like games and chatting. Meh. But I’ve mostly been able to stop playing Flyff! Though I still play from time to time…

The image on the right shows the Mickey Mouse Photomosaic puzzle that I helped my brother finish in half the Easter vacation! As you can see a piece is missing… I guess we should try asking the producers to send the missing piece.

Some other stuff I’ve been doing lately:

Hmm, I can’t think of anything else interesting I’ve done since my last update… I guess I don’t need to write a lot every time. I should probably try and remember the more special things and write about those instead. Hah! As if anything special ever happens. Oh well.

2 responses to “Nothing in particular”