RSS
← Minicinema in my bedroom
Minor additions to website → 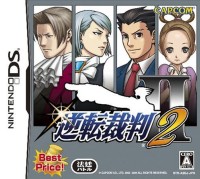 As a tribute to the bestest game ever, I’ll dedicate this post to Gyakuten Saiban 2/Phoenix Wright: Ace Attorney – Justice For All.

This game takes place roughly a year after the first game, and the cast includes many of the characters from the first game, but introduces many new characters too. Phoenix Wright (of course), Maya, Mia, Gumshoe and Wendy Oldbag (she’s just priceless!) are there, to mention a few. 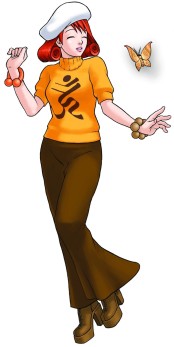 The graphics are more or less the same as in the first game, with added graphics for new people and locations. There are a few more animations added for some of the old characters, but there aren’t any radical changes. I feel that the backgrounds in many of the new locations are more colorful, but maybe that’s just because I’m so used to the old backgrounds that they seem boring now.

Most of the music has been changed, and though I didn’t really like it in the beginning, it’s grown on me I guess. But I still think the court music in the first one gave a bit more “action” feel than the new one… There are a few tunes that I kind of like though, like Pearl Fey’s tune, which is based on the old “Gyakuten Sisters” tune, but “cutified”, so to say.

The gameplay is mostly unchanged, with the three main exceptions being:

The changes does give a bit more variation to the detective part, which can still be frustrating when you can’t figure out where you need to go to progress the story. However, I had relatively little trouble working through the game, maybe because I already know about the different techniques used in the first game to progress the story.

The game seems to be a little bit shorter than the first one, since they didn’t add any new cases to it, so it’s mostly just a port of the second GBA game. The music is improved from the GBA version though, I’ve heard. And it’s of course still possible to shout “Hold it!” and “Objection!” with the mic like in the first DS game. Anyway, the story is quite good, and I definitely recommend the game to anyone who likes a game with a good story (and who doesn’t mind reading a lot and thinking a bit when playing a game).

Here are a few more links concerning this game: