My old website died, and I haven’t even had time to resurrect it. Since they added banners on that site, maybe it’s just as well to leave it dead… And because some of the contents has been mirrored here, I might as well continue using this site! I turned on commenting on this site too. (I had previously disabled commenting here because I wanted people to comment on my other site instead. So much for that.)

I recently installed the Windows Live Messenger 9 beta, and though I didn’t really use it much, it came with Windows Live Writer, which I actually really liked! It’s basically a blog editor which lets you post blog posts in a word processor-like editor. I’m even writing this post using this program right now: 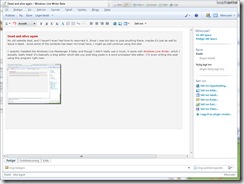 The best thing with this program is that you can just paste photos and images into it (like when using Microsoft Word), and it’ll take care of uploading the photo and making thumbnails for them. And you only need the YouTube URL to embed a YouTube video clip into the blog post! So it’s really nice free program from Microsoft, which makes it a lot easier to write blog posts quickly. Maybe I’ll post more stuff on my blog now. Which nobody reads anyway. Well, I guess I’ll be using this as kind of a diary, so that in the future I can look back and see what kind of silly things I was thinking back in the good old days when we were still using 2D monitors for computing and we had to write using our hands.

I tried out Ubuntu Ultimate Gamers Edition 2.0 on my laptop. It had lots of free 3D FPS games, I didn’t realize there were that many for Linux, and they actually look quite good! And the desktop GUI came with Compiz, which is basically a large set of (mostly useless) fancy effects, like shaking your windows around and having fire/water/glittering effects when you do various things like minimizing your windows and opening programs. Here’s a random video I found of this OS:

The worst part of it all is that even with all these effects, and running it from a DVD (it wasn’t installed on my PC), it still felt rather a lot more responsive than Windows Vista.

I really need to get rid of Vista and install XP instead.

By the way, if you see any typos, it’s because my wireless keyboard is running out of battery and letters seem to not always show up when I press them.