Been busy moving to my new apartment lately, so I haven’t had time to sit down and blog. How do some people get time to blog almost every day? Well, I guess I’m probably too picky about how I write things, and I just tend to write too much when I first sit down to write.

As I wrote in my previous post, I got the keys for my new apartment on April 15th, a few days after I got back from the Easter camp. After that I’ve mostly been moving things, unpacking and washing the apartment. Usually the seller is supposed to wash the apartment before moving out, but he apparently was too slow moving out, and was still moving stuff when me and my father got there. But to compensate for that, I didn’t have to pay the last half of that month’s, uh, apartment costs (“rent”, but not really), plus I got a bunch of furniture that he didn’t need or want, two bottles of wine and some wine glasses. (Basically the stuff he hadn’t had time to move yet.) So I’m not complaining. 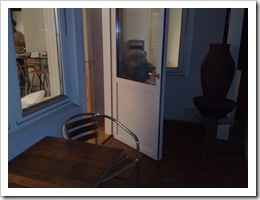 He also sold me his oven and fridge for 2.000NOK, which was quite cheap, considering that buying something of similar metallic style new from the store would probably cost around 10.000NOK. The oven door was very dark with soot, it had apparently not been cleaned much (or at all). But I managed to scrub it clean, now it’s almost like new! The oven top has some scratches though, but at least that means I don’t need to worry about making it look worse.

I got a bunch of furniture from home. I moved my old desk, which fits quite well in front of my bedroom window. I also got an old armchair, quite comfy! Also I got a floor lamp. And I got a couple of tall chairs from home, and some matching chairs from my uncle, which are perfect for the “coffee table” outside the kitchen. 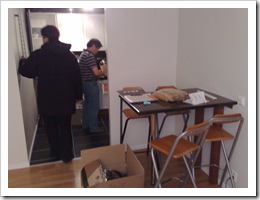 My uncle also gave me a glass closet for putting decoration items, I’ve mostly filled it with Kinder egg toys, figurines and various other toys. BTW, that gun is an old PC laser gun thing which I couldn’t get working anymore (since it was made for old Windows 3.1 computers…), so I eventually gave up, took away the cable and made it just a toy gun. I considered putting a laser pointer in it, but that would require modifying the plastic to hold the pointer in a way which worked with the gun’s buttons. I decided it was too much work and gave up. 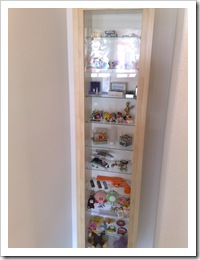 The latest things I bought is a somewhatly expensive work chair for my desk, a wardrobe for the entrance, where I could put my jackets and shoes, and a 52″ full HD LCD TV. I ended up going for LCD since it is supposedly better for computer connection and game consoles, which will probably be at least 80% or so of what I’m going to use it for. 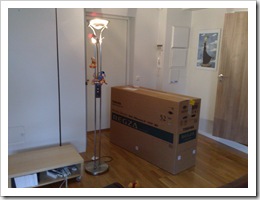 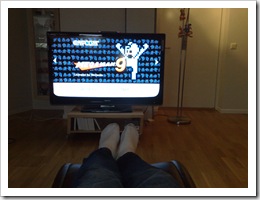 You can see the side of the wardrobe next to/behind the TV. I went with a mirror door for the wardrobe, I think it turned out quite nice. Wooden doors were actually more expensive… The TV was so big I wasn’t sure if I would be able to get it out of the box. Eventually I realized that I only needed to remove the white plastic “locks” (you can see them near the bottom of the cardboard box), and then lift the cardboard up to remove the top. Then I managed to “tilt” the TV up on the wheel TV stand (that I also got from home). The TV was too big and heavy for me to just lift straight up, which is why I tilted it… I was slightly worried that I would drop the TV and break it, but I didn’t want to wait for my family to come over and help me lift it before I could test it out. Anyways, now that it’s on the wheel stand, I can roll it around and test it out in different locations without having to lift it, so it’s all good!

So yeah, now I’ve got most of the stuff I need for my new apartment! The things that I think I’m going to get next are a sofa (I’m probably going to buy a bed sofa, for guests), a microwave, and most importantly, proper internet. I’ll get it on Monday! Mobile broadband has worked quite well, but I think I prefer proper broadband (well, some people clain ADSL isn’t “real” broadband, but anyways).

Today is May 1st, and it’s quite sunny outside. In fact, I should probably head out and enjoy the sun! At least sit on the balcony. But I also really want to play more games on the TV… aaah, dilemma! That asides, I still have a lot of things on my todo-list that I haven’t had time to do because I’ve been busy moving. *sigh* Always so much to do… Well, better start doing some more stuff. At least I got a sudden vacation today! (I actually didn’t realize I had today off before my boss mentioned it at work yesterday. If I knew beforehand, maybe I would even have planned a trip somewhere… ah well, too late now.)