Friday last week I met with Gigi and Phillip for some sort of reunion. Gigi has been in Shanghai for 8 months since last time she was in Oslo, if I remember correctly. It was fun seeing her and Phillip again. Although Phillip was in Oslo, we haven’t really had an excuse to meet before now… everyone are too busy nowadays. More people were invited to the reunion, but only me and Phillip could meet on such a short notice, apparently. Forgot to take a photo too. Ah well.

The Saturday after that I went to a barbeque party with my family and some family friends. Ate a bunch of really salty chicken, some salmon and some squid, plus salad and various other food. Then I played with the kids a bit. (Misin and Lisa and Vilhelm.) Some badminton and basket, then played some cards when it got colder outside. It was nice I guess. 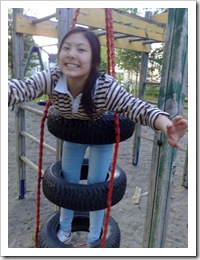 ^ I have no idea what Misin was trying to do here.

v Lisa trying to slamdunk on a basket that is low enough for me to reach almost without jumping. (This video was removed on request from Lisa.)

Sunday we had a family reunion/dinner party with some relatives that we don’t see so often. Ate a lot, talked a bit with my cousins, and had a look at my new cute little twin cousins! 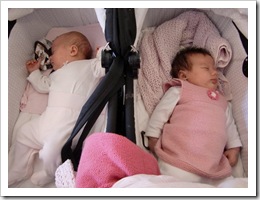 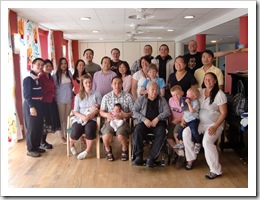 My grandfather (mother’s father) is the oldest guy sitting in the wheelchair.

Monday I went and played board games with Kristoffer, JÃƒÂ¸rgen and JÃƒÂ¸rgen. I got last place in Puerto Rico, even though another person was playing for the first time… I spent too much time trying to work up money to buy many expensive buildings, but the game ended when the first-timer took the mayor even though we were low on slaves. Well, I probably need to work up cash quicker if I want to play that strategy anyhows, so I can’t blame others… We played Carcassonne after that, where I got a very good second place (10 points behind first place, and quite a bit in front of the other two)! If only I had start putting more farmers at the end, I might’ve gotten first place. But eh, I’m glad I didn’t end up last in both games.

Today the church went out for barbeque. I also played a bit of soccer, but was too tired to stick around for the second half of the match. Paddled a bit with Sean and Marcus too, they came visiting from Stockholm! 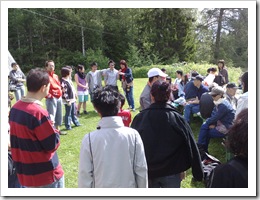 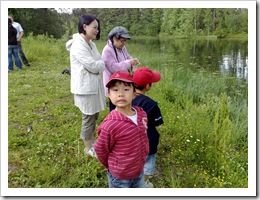 For the barbeque I prepared a quick burger (no salad or anything), a pork steak, vegetables wrapped in aluminium foil (squash, mushrooms and onions with margarine and garlic), and a banana with two pieces of Toblerone and one piece of truffle (also wrapped in aluminium foil). Both the burger and the pork steak got a little burned, but tasted okay. The vegetables could’ve needed more seasoning though, maybe more garlic and salt… but I just added ketchup and sennep. The banana however turned out delicious! Chocolate is yum. Got some sausages and other food from other people too, got pretty full. 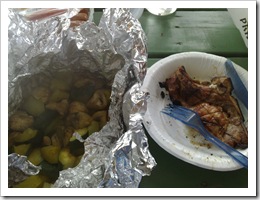 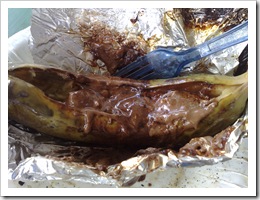 Was supposed to meet William today, but he was busy after all, so we said Monday. I’m considering going home to my parents to see my relatives from Stockholm a bit more, but it is also tempting to just chill at home… Just played an hour or two of Super Paper Mario, should be very close to the end of the game now. Ah, need to make the nametags for Summer camp too. *sigh* I guess I should try and finish them quickly.

Edit: Oh, almost forgot about the title I picked. I bought a bathrobe, it was, uh, on sale! 99NOK instead of 399NOK! Since I bought it online I had to pay postage though, but I also bought a bunch of other stuff that was on sale, so I think I might have still saved some money. (And the postage isn’t as much as 300NOK anyways.) But yeah, it’s nice to wear bathrobes in the morning and after showers. It’s my favorite clothing article now! Woohoo! …but I think I feel a bit too awkward to actually add a photo of me wearing bathrobe. Maybe later. 😛