RSS
← Back from vacation!
Barbeque party →

Haven’t done anything particularly special after vacation, just working and cleaning my house mostly. Had quite a few family dinners with my parents friends and relatives, so I haven’t had much time at home, and I also had to fix up the recordings from the summer camp. But I finally finished uploading them, you can listen to the youth and young adults sermons online! I haven’t fixed the worship parts yet though… But some of Jim’s sermons has some worship songs, and the Sunday service includes all the worship.

> Vilhelm playing with my uncle’s birds. That must be how he got sick, hurr hurr. Except probably not.
v My aunt made an interesting Dragonfruit dish! 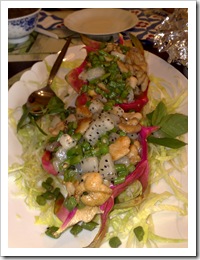 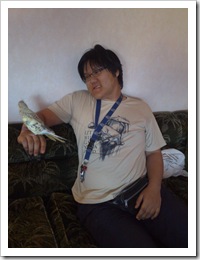 After finishing the recordings, I took some days off to play video games, feel like I haven’t had time to properly play games in the last few days! I finally beat Super Paper Mario. It’s not a difficult game at all, I just needed to have enough time to run around enough. I didn’t even get all the Pixls (powerups so to say), but I doubt I’m going to play it much more, since I’ve still got a bunch of games that I intend to play through. I started on Prince of Persia: Sands of Time before my vacation, and I also started playing Dark Sector now on my XBox 360, since I felt like some HD gaming after finishing Super Paper Mario on the Wii. Sands of Time is really quite sweet, with the wall-running and jumping puzzle parts, and how the acrobatic multiple enemies fighting system works! Dark Sector has some cool stuff, like picking up weapons from afar with the glaive, and remote controlling your glaive in slow motion to take out multiple enemies with one throw. But that asides, it’s pretty much a generic action game with a mediocre story. Still quite fun though! And it looks great on my TV. 😀

Oh, I haven’t played much Sam&Max, only finished the first episode, and played briefly on the second episode. I just don’t really feel like playing slow adventure games nowadays… Ah well, it can wait.