I’m leaving for Hong Kong in just a few days! Looking forward to have some time off, meeting relatives and friends. As usual, a bunch of Chinese friends from Norway and Sweden are also going to Hong Kong, so I’ll be seeing them there! The more the merrier and whatnot.

The last week I haven’t really done much interesting. Went to get my second Twinrix shot and the swine flu vaccine, and also donated some blood. Chose a small Fiskars paring knife as a gift, it’s pretty good and sharp! Nice to have a smaller knife when I want to cut just some smaller vegetables. I already got a Fiskars kitchen knife from my parents when I moved out. (I think it’s that knife, look pretty similar in any case.)

On Sunday we had a baptism at church, where one of the new members of our youth group got baptized. Didn’t take any photos… Oh well. In her baptism speech she told a bit about her background, lots of things I didn’t really know… But she said she enjoyed joining and being in our youth group. I’m glad she liked being with us, and that God led her to us. I pray that we’ll be able to keep taking good care of her and all the other youth in our group!

I chocolate-covered the orange peels I made. Taste quite a bit better, although it still tastes like sweet and somewhat bitter orange peel. Just now with chocolate. My colleagues at work said they were good though! I’m guessing adults used to drinking coffee might like this kind of candy better than the youth at church. That, or maybe Norwegians like bitter candy better than Asians. 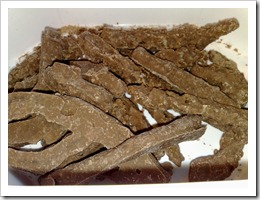 Bought a Visco-elastic pillow at Kid, I guess I’ll have to call it a copy of the expensive Tempur pillows. It wasn’t exactly cheap for a pillow, but since I looked up the Tempur pillows online and they cost around 800NOK, I figured 150NOK for a similar non-branded pillow wasn’t too bad of a deal. Felt pretty good sleeping with it the first night at least! 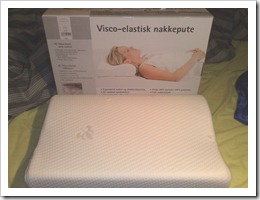 Have been trying to figure out what to bring to Hong Kong. My mother always says we could just buy new clothes in Hong Kong instead of bringing lots of clothes in the luggage. But I’ve decided to bring the clothes that are somewhat broken (with holes or worn down edges) or are miscolored, and then either throw them away or just leave them in Hong Kong when leaving! That leaves more room in the luggage for stuff I buy! Although I don’t really have any big buying plans this time. Not that I usually have lots of stuff I want to buy. I think I like looking at things a lot more than actually buying them. I do want to try not filling my house with useless stuff anyhows, I generally try to only buy stuff that I know I’m going to use at least a couple of times every month, preferably week.

I emptied my freezer now and turned off the refrigerator/freezer. Took all the stuff from the refrigerator and put it out on the balcony for keeping cold, although it’s probably too cold actually. But I had to do it because ice had been built up in the freezer from back when I didn’t close the door properly and it stayed slightly open for a night and workday. Now I’m planning to leave the refrigerator off since I’m going to HK anyways! But I have to do something about the leftover food. Either bring to work or to my parents house I guess.

Also, apparently my Vitamin D levels are up to a somewhat normal level now, my doctor said. So now I can’t make excuses when falling asleep! I still manage to get up in time for my morning devotion and exercise at least… I guess I’ll just have to see if I ever get myself to go to bed earlier. *sigh* Better start by going early today! But I’m still waiting for the laundry to finish… Ah well.