Tried making this cake. Will take a photo tomorrow to show how it turned out, right now it’s cooling down in the fridge. The baked part of the cake got kind of weird (it was stiff on the top, but almost hollow inside), and the chocolate mousse felt slightly too liquidy. Hope it’ll harden more when in the fridge…

Went ice-skating with the youth group on Sunday. It was okay fun I guess, even though I don’t really like ice-skating. Or winter sports. Or sports in general. Oh, we’re going on a skiing trip in a few weeks… I’m scared. But I think it’ll still be fun going on a trip with everyone! 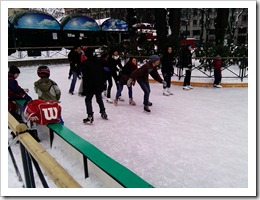 Also watched Shutter Island with some friends a week ago. It’s a pretty good movie! Because it’s not just some generic Hollywood action movie. And you probably won’t expect the ending. It’s not as scary as the trailer makes you think, it’s more of a… uh… dramathriller. Yeah, that should be about right.

Also visited my colleagues home with some other colleagues, to see his new surround setup. Unfortunately the movie we watched didn’t really work in surround. We watched “The Informant!“. It was okay, although I fell asleep a bit halfways, and I couldn’t get all the dialogue because it was not subtitled. But it was reasonably entertaining.

Aaah, it’s too late now… need to do the dishes from the cakebaking and then go to bed. Have actually been able to go to sleep around 22 – 22:30 the last few days, but I guess I won’t make it today because the cake took so long time to make.