Been playing a lot of Aquaria lately!

It’s a beautiful 2D/sprite-based Metroid-like exploration game. You’re a mermaid with amnesia who can swim around and “cast spells” by singing, when you sing you pick out a sequence of 8 different notes. Although you don’t actually get many actual spells, most of the spells are for transformation into different forms, with different powers. The first form you get is the “Energy form”, which shoots homing energy beams. You get new forms as you go through the game, and the powers from each form allow you to go to places that you couldn’t access before. The graphics are, as I mentioned, sprite-based, but pretty detailed and vivid. Not everything you meet are enemies, there are lots of fish, crabs, dolphins, turtles and other creatures you might expect to find in the water.

I played the demo probably several years ago, but never got around to buy the full game before now because I had so many other games that I hadn’t finished playing yet. However, I bought this game as part of the Humble Indie Bundle, which lets you buy Aquaria and some other indie games for whatever price you wanted, and part of the money goes to charity. As of writing this there are still 7 hours left, so you can still buy it cheap! 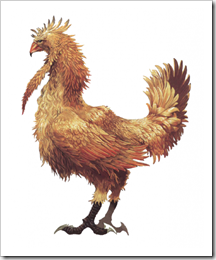 Have gotten to the “missions” part/chapter in Final Fantasy XIII, finished the first 17 of the missions and also mission 36 or something. Now I can finally use the chocobos! It’s just way too much running around back and forth in this chapter, having a chocobo helps at least a little… They’ve made some funky chocobo music.

Also I’ve been trying to settle in at the new apartment. My parents brought me to IKEA where I bought a mini computer desk that could fit inside the “closet” in my bedroom. (It’s actually just part of the bedroom separated by some sliding doors.) So now I’ve got a computer workplace at least! Also bought a shelf/rack thing that would fit in the corner of the closet, so I didn’t have to try to balance all the boxes and bags on top of each other like I did before. I have also set up my stuff and posters in my room pretty nice now I think. 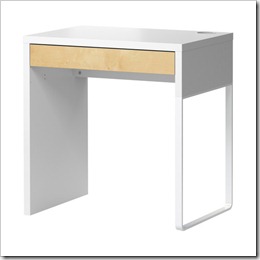 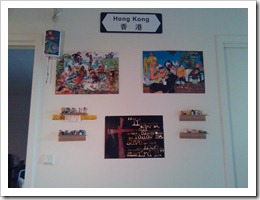 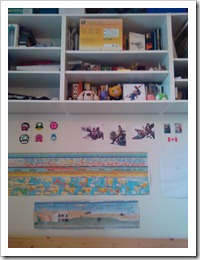 I got an old Toy Story wall lamp from a friend of the family, he had originally planned to throw it away since none of his teenage sons wanted it anymore. Hurr hurr. The reason it’s hanging on its side is because I’ve just used tack-it to stick it to the wall, and when I hanged it the correct way it would always fall off after a while. So now it’s partly hanging from its cord and partly from the tack-it, so it doesn’t fall down.

Had “dugnad” at church last Saturday, only Vilhelm, Tina and Stella showed up to help with the painting. Minh Thu and Lisa cleaned out the Youth group closet though. We still almost managed to finish painting everything. The bigger problem is that one of the paints was the wrong color… we ended up painting it anyway, but it’s pretty apparent that it’s wrong. Well I guess it might still look a bit better than when the wall looked partly burnt and discolored. (It was the part of the wall which was covered with heaters, but we changed to new, smaller heaters.)

Oh, I installed XBMC on the computer connected to the TV, it’s quite sweet! It scans through your video collection and downloads information about the movies and TV shows from internet, so that you can browse through them like browsing through a catalogue of movies, with cover art and movie descriptions. And for TV shows it will automatically download episode descriptions. So you can look through the description in case you forget which was the last episode you watched. 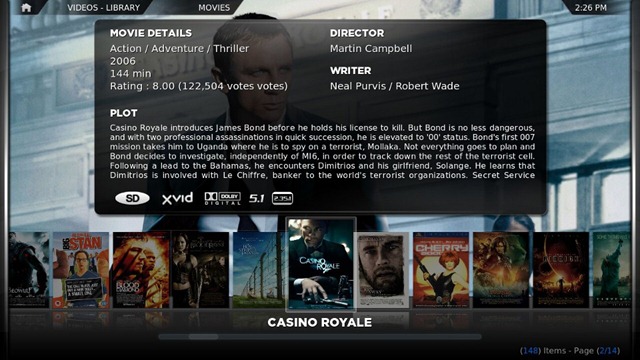 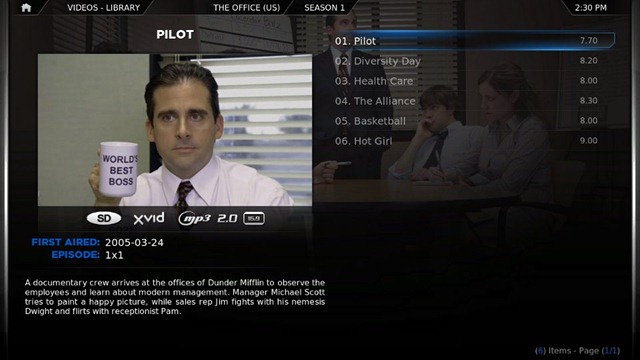 (Note: The screenshots were taken from the XBMC website, it’s not from my computer.)

You can also install plugins to do various things, there are a bunch of plugins for showing videos from popular websites, like Youtube, Gametrailers (this one didn’t work for me though, but some other gaming websites worked), National Geographic to mention a few. Also there’s a plugin for downloading subtitles. And I installed one for showing Bleach episodes directly without predownloading. Although I don’t really follow the anime since I read the manga.

Hum yeah, so that’s all for this post. Apparently a month since the previous one. Actually almost none of the friends that I’ve subscribed have kept up their blogging, I guess exams might be part of the reason. Good thing I don’t have any exams! Now is vacation time!