RSS
← My February and March gaming
Got my 3DS →

Went to the 3DS launch event in Oslo yesterday! The event was held at Hard Rock Café, which one of my friends said was kind of strange, since Hard Rock Café isn’t really what she considered to be a geeky place. It did feel a bit out of place seeing the various leather clothing and music decorations on the walls around the Nintendo stands! But that didn’t bother me too much. 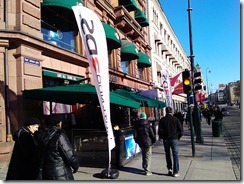 I should have asked for one of the banners to bring home as a memory.

I entered a contest on the http://gamereactor.no/ website and was one of the 10 people who won a VIP pass to get into the launch event 1,5 hour before it started for everyone else. So I got to test almost of the games without having to wait in line! Which was nice. 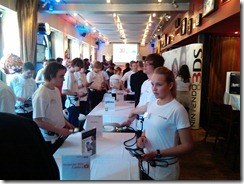 No lines! Woohoo! The people in white are the 3DS body guards, protecting the demo units with their lives if necessary. (Citation needed.)

I was at first kind of surprised that each 3DS was attached to an actual person. Wait, actually the first surprise was that I thought someone from Gamereactor would greet me, and more importantly, confirm that I am actually one of the "chosen ones" to enter. But I just told the people at the entrance that I came with Gamereactor, and they let me right in! In fact I never talked to anyone from or with Gamereactor because of that, since I wasn’t really sure about starting a conversation with random people.

Which brings me to my previous point, which is the 3DS body guards that I had to converse with in order to try each 3DS game. All of them were really nice people and was glad to ask me to test the game when I approached them, so talking with them was not a problem. The main problem was my horrible multitasking skills. Because I felt that I had to try talking with them, I had at first a hard time trying to actually play the games. In fact, when testing out Zelda, I was just running around randomly crashing into walls and falling into the water because I was talking with the (very cute) girl attached to the 3DS about the 3D effect, the differences between the 3DS version and the N64 version, etc. (I insist on the fact that some of the girls being cute had nothing to do with me being distracted. Because it was the same when I was trying the games that were attached to guys. Really! Probably.) The other problem was that I didn’t really feel like playing for too long because of having a person hanging over you and/or talking with you while playing. But I did finish some of the shorter demos, and after a while I got better at focusing on playing, and only occasionally exchange a few comments with the body guards. 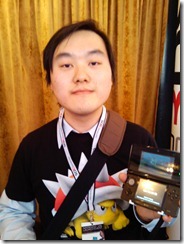 I even got to take a photo with the 3DS! Which is not really that cool since it’s only a week untill they start selling it, but anyhows. I kind of regret not taking a photo of/with the girl attached to the 3DS too. Though I guess I didn’t want to be intrusive. Or something.

Anyways! As for the actual 3DS. The 3D effect does work, it’s quite amazing! But it is also quite difficult to hold the 3DS "correctly" (the sweet spot as some of the body guards were explaining). Some games were easier than others, possibly depending on how much depth the game tries to add. The worst ones were probably the games where you had to move the 3DS around to aim, because moving the 3DS would easily make you lose the sweet spot where you could see the 3D effect. In these games it was usually easier just to turn off 3D entirely.

But other than that, I didn’t have a problem with the 3D. Even after trying various games for a bit over 2 hours, I never felt like I got tired in the eyes. One of the stand people (yeah I’ll stop calling them body guards now) said that it was quote individual, but that he had met very few people who actually got quickly tired in the eyes. 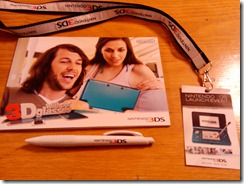 I got this stash. And I found out later that I was actually entitled to a free burger from Hard Rock Café with the VIP pass! I didn’t know! That’s what I get for not talking more with people. *sigh* Oh well, my mistake.

The games that I had most interest in were:

Most of the other games just didn’t really catch my interest as much. I did preorder Super Street Figher IV 3D for my 3DS because the best games aren’t available yet on launch day, and I figured Street Fighter IV is a decent (though very hard) game that I still don’t have on any other console. Resident Evil: The Mercenaries 3D is just a mission/highscore-based game, so I think I’d rather wait for Resident Evil: Revelations which is more similar to "normal" Resident Evil games. Mario Kart 3DS looked good, but I seriously suck in Mario Kart, so I don’t really want to get that game.

It’s getting late now so I think I’ll skip mentioning all the other games I’m not as interested in. But I was quite happy that I got to test the 3DS, and am now really looking forward to release day! Hopefully the webshop I preordered the 3DS from will send it a day earlier so it’ll arrive on release day. Or at least not send it many days after release day, which would make me regret preordering it instead of just buying it in a store on release day!

← My February and March gaming
Got my 3DS →