I spent my Christmas and New Years in Hong Kong this year too. Kind of nice to meet my family again, but this year I think I spent even less time travelling around Hong Kong than before. Partly because we live so far out on the countryside that going anywhere further than Sheung Shui and the few closest train stations is a hassle, but also because I feel like I’ve been most places already.

Though this time we went to Taiwan, first time I’ve been there! And first time trying a hot spring, which was quite enjoyable!

I want one of these! Also a sauna.

This time I tried to not hesitate as much when shopping, trying to buy things if I thought I wanted or needed it. I think I was quite successful because after two weeks my luggage was already almost too full to close. Which made the last week of the trip kinda boring since I almost couldn’t buy anything anymore, so I almost didn’t bother going out.

I did buy more stuff after this.

I enjoyed building the Space Rail, kinda want to buy a bigger one! But after using it for a while, the rails started moving around making it not work so well, so I had to adjust it. I guess I didn’t build it well enough.

I also bought a PS Vita, originally for a friend, but I couldn’t find a cheap one and he didn’t want the kinda expensive one I bought, so I just kept it. It does have nice graphics! Though I don’t have any other games to play on it once I finish Uncharted: Golden Abyss. Maybe I’ll try creating a foreign PSN account and see if I can buy any games. But I’m still trying not to buy new games before I finish more of the ones I have at home. Oh, I did beat Arkham City, although I didn’t finish all the sidequests yet. 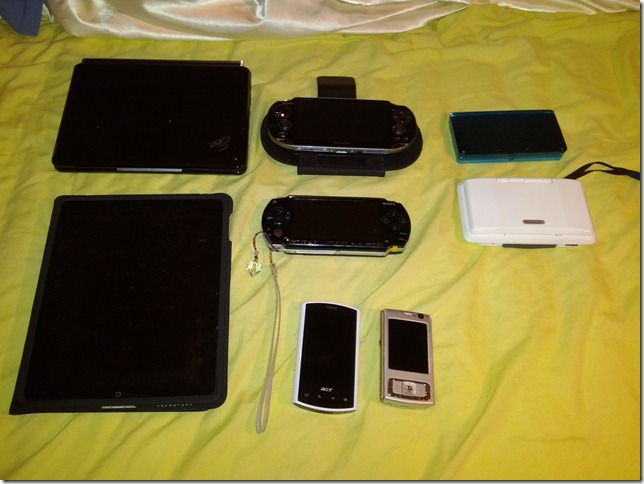 So many gadgets! The PS Vita is indeed bigger than the PSP.

I must say that after I got used to the 3DS, I always feel kinda disappointed playing games on flat monitor, even when playing TV or PC games. Although I do agree that the 3D on the 3DS isn’t all that good either, sometimes it’s not easy to keep the “sweet spot” for watching 3D, making the screen a blurry mess. I consider buying a Sony Personal 3D Viewer, which would completely eliminate the problem of crosstalk by putting a full 720p monitor in front of each eye. But it’s apparently more expensive than a cheap 3D TV and not nearly as sociable. And I’d probably get even more nearsighted. But it would give cinema-size 3D display without crosstalk! And I wouldn’t need to figure out what to do with my current HDTV, which is part of the reason why I haven’t bought a 3D TV already. Don’t want to throw it away so quickly, and having a TV in my room in addition to one in the living room seems a bit excessive. Oh well, I guess in the end I’ll just wait more… I’d have to buy a new PC to be able to play 3D content smoothly anyhows.

Speaking of 3D, I made a 3D video with the food photos I took in HK.

I got a new phone at work, the Samsung Galaxy Nexus! It is great, and now that I have free mobile data traffic from One Call, I can at any time surf the web when I want to lookup anything, which is really nice! I could surf the web with Acer Liquid, my previous Android phone too, but it was slow whenever I installed more than a few background apps, so I didn’t like using it as much. But the new phone is a lot more responsive. I don’t even use my iPad so much anymore, leaving it at home most of the time. 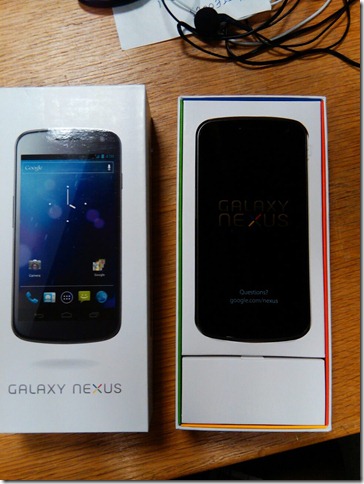 Nowadays I feel like I just want to stay at home more, and take a break from travelling… Maybe try and finish more of my games. Although I will be travelling next month too. Anyhows I should be heading to bed. I still suck at updating my blog with small updates instead of big updates. Oh well.

One response to “It’s a new year!”