Last few weeks have been rather uneventful. I did go to the skiing trip with the youth group near the end of February, but I didn’t do any skiing. Just relaxed at the cottage, using the sauna a few times. Besides that, I decided that I’d rather try to spend some time trying to play through more of my games than to travel around nowadays.

I ended up buying Chaos Rings Ω, Catherine and L.A. Noire: The Complete Edition because they were on sale. Even though I try not to buy any games before I finish the ones I have. Well from now I will not buy any games. Unless they are really, really good. Meh. Well, it seems like I did manage to finish quite a few games so it might not be too bad.

L.A. Noire was very laggy on my laptop even at lowest graphical settings, but it worked slightly better on the TV computer. So I might play it there, although I am planning to build a new gaming computer this year. After researching a little, it seems like I might want to wait for Intel to release Ivy Bridge, which should be faster and use less power than the current generation Sandy Bridge. It might not be available before June, but I have quite a few XBox 360 games left anyways, so waiting shouldn’t really be a problem.

Bought a new gaming keyboard (Logitech G510) and mouse (Ideazon Reaper), because I got a few discount coupons. No idea what I’ll use all those programmable keys for, though I hear Diablo III is coming out in a few months. Maybe it’ll be useful there somehow. The keyboard also has a display which can be programmed to show game stats for games which supports it, but is it really easier/faster/better to look at the stats on the keyboard as opposed to having them onscreen? Wasn’t it more of a problem back when computer resolutions was lower? Oh well, it is nice having the time and date or the currently playing song showing on the display. 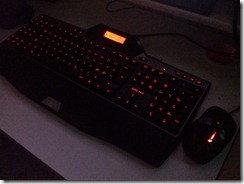 While getting the discounts were much of the reason why I bought these, I was also slightly annoyed by the fact that my Bluetooth keyboard and mouse would sometimes suddenly disconnect. So it’ll be nice to use wired accessories again. There is however a problem with the keyboard driver hanging when resuming from sleep mode, so I have to kill the keyboard driver and restart it for the keyboard screen and special buttons to work properly again. The keyboard itself still works though, so if I don’t need any of those special functions I can mostly just ignore it.

Spent most of today going through my e-mail, tidying my apartment and desk, then suddenly deciding to move around the desk in my room. Currently using the window sill for my monitor to free up more space on my desk, it works but I’m not quite satisfied with the monitor being too far to the right of the center of the desk… Considering to either buy a new desk or buy a wall mount for the monitor instead. Or both.

Oh yeah, also spent many hours yesterday and today trying to replace the screen on my old phone. It worked! 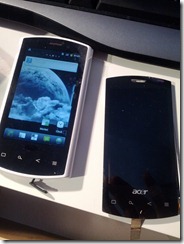 And then it stopped working. And then I gave up because I had already spent too many hours taking it apart and putting it back together again over and over, so I just bagged it and stashed it in the drawer. Probably throwing it away some day.

In the end I didn’t get much time to play Mass Effect 2 today… Maybe I’ll sneak in a few hours after doing laundry now. But it’s Easter vacation next week anyhows, I want to try and finish a few games before going to Easter camp!

← Paris
Cruising on the Mediterranean Sea →