Cruising on the Mediterranean Sea 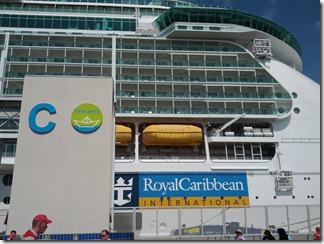 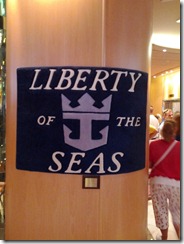 The mini golf was too boring since all the courses were mainly flat with some slightly different turns and bumps. The gaming arcade was bigger, but the most interesting games were broken, and it also isn’t free anyhows, so we didn’t spend too much time in there. I did like the FlowRider surfing simulator, but most of the time it was too cold outside, so I only tried it a few times. In fact, most of the "swimming" time was spent in the warm whirlpools, since they didn’t have an indoor or heated swimming pool, though I did swim a little when the weather wasn’t too cold. Never got around to try the climbing wall, but I must say, it was a lot taller than the one I tried on the last cruise. It’s actually quite a shame that we never tried it, but, uh, we blame it on the cold weather on deck when the ship was sailing. 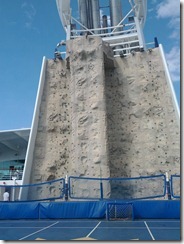 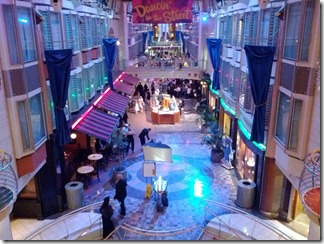 A lot taller than Leon!

The center of the ship has a "shopping street" with various tax-free and souvenir shops, and some cafés and restaurants, where the food was "free" (included in the ticket price), except for the Ben&Jerry’s which costed money. I must say we hardly ever spent any time there except for when eating at the restaurant there. The shops didn’t really impress more than on the previous smaller ship. 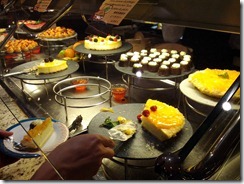 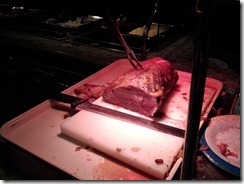 The food on the ship is really what I liked the most, and this time they didn’t have to shut down the ice cream machine because of fear for spreading stomach illness! While some of the food on the buffet was quite plain and boring, as it usually is on buffets, some of it was quite delicious!

The ship docked at Cannes in France, Livorno in Italy (from where we travelled to Florence and Pisa), and Civitavecchia in Italy (we went to Rome from here), before going back to Barcelona. We were quite lucky with the weather, it was mostly sunny without being too hot to bear walking around the cities! We went to many famous landmarks and saw tons of tourists taking photos of them holding up the Leaning Tower of Pisa and queuing to see the Pope or whatever. I did go to Rome with class once before, but I didn’t notice before this time just how many old buildings there are next to each other there! It’s actually quite amazing to think that 2000 years ago the Roman people were walking around on the very same builidings that are still there now.

I see that I haven’t updated the blog in almost two months now, and I really wish I would manage to get myself to make more smaller updates instead of a few large ones. Hum… I’ll just make a really short summary of things I’ve done the last two months:

Huh, according to that website about the Crystal edition, it says it comes with a T-shirt? I haven’t even opened the box yet since I figured I wouldn’t have time to play the game yet. Oh well, I’ll have a look. After that, Diablo III!