RSS
← Cruising on the Mediterranean Sea
Camps and stuff →

In May I finally built myself a new computer. I ended up buying a GeForce GTX 690 graphics card, even though it was actually crazy expensive. I just figured that for once, I’d like to indulge myself a little when buying a computer… I also bought a 27” NVidia 3D monitor. Even though a lot of people say that they get dizzy or uncomfortable watching 3D, I’ve never had that problem to a large degree. Playing Diablo 3 in 3D is amazingly awesome! Like watching little toy figurines run around and kill things. I also bought Battlefield 3 so I could have a modern FPS to test in 3D mode. Only tried a little so far, but it does seem to work quite smoothly in 3D even at full resolution and details! Look forward to playing more.

Besides gaming, it feels really great to have a computer that runs smoothly with barely any lag or delays! I think it takes around half a minute to boot it up even when it’s completely off. 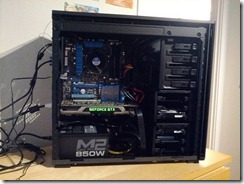 I like the shiny GeForce text. Though I don’t see it much since my computer is on the floor now.

The parts I bought for my computer:

As I mentioned I’ve been playing Diablo 3, and for whatever reason I’ve managed to get myself to Hell difficulty and level 55 now, even though I originally only intended to play through the story mode once in Normal difficulty. I probably wanted to get to level 60 just because people on my friends list are level 60 already. But I just don’t seem to have enough time to play that much, and by now my friends don’t even seem to play Diablo as much either anyways. So most likely I’ll give it up and play all the other games I wanted to try out on my new computer.

I also finished Amnesia: The Dark Descent and Gravity Rush. Amnesia was quite scary at first, but after getting used to dying a few times, it just started feeling annoying because I disliked having to stop and hide and wait before I could keep going. Since I was trying to finish it quickly. 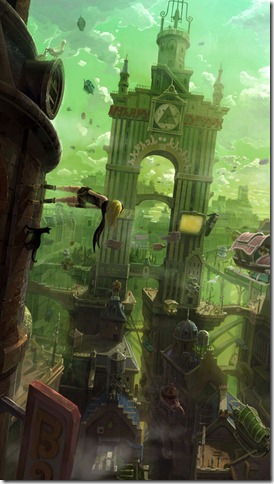 I really liked Gravity Rush, even though I found the story and dialogue to be quite “simplistic”, for a lack of a better word. While there are a couple of more complex ideas in the story, the game doesn’t really delve any deeper into those parts. And the game ends before (slight spoiler alert) answering many of the questions raised during the game. Still, the story is interesting enough that I want to know more about the main character and the world in the game! I do hope there will be a sequel or DLC which tries to explain more, but even if they do not, I would probably buy them anyways. Already bought the currently available DLC after seeing that it actually does have some story missions (missions with dialogues and cutscenes, though not really plot-important stories), will probably buy the rest when they are out.

I started playing Assassin’s Creed 2 before building my new computer, but after I finished building it I’ve mostly been playing computer games (mainly Diablo 3). Maybe once I convince myself to stop playing Diablo I will go back to try and finish Assassin’s Creed 2, though I must say that I am quite a bit less interested in console gaming now that I have a great gaming computer, and tons of games I’ve yet to play on it.

In June, besides gaming, I‘ve been to the amusement park Tusenfryd, gone barbequing a few times, made sushi and tempura, watched Prometheus, played mahjong with some friends, and preparing for summer camp (mostly working on the camp booklet and the booklet web app that I wanted to try making!) 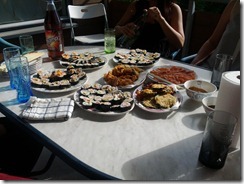 Made sushi and tempura with my brothers and some friends

At Tusenfryd I tried out the SkyCoaster with Tore and Elizabeth, though it was honestly slightly disappointing. You only got a kick out of it the first second or so when you are in free fall, but as soon as you start swinging and feel the grip of the equipment you’re wearing, it doesn’t really feel that different from f.ex. SpinSpider. Considering you have to pay 150NOK-195NOK to try it, I don’t really think it’s quite worth it. The other big disappointment was that Nightmare was closed due to technical problems, I really wanted to try it. Oh well… 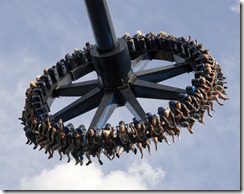 The SpinSpider ride was quite fun!

Oh, a tips for those going to Tusenfryd, you get cheaper tickets if you buy online before you go there, and if you have a VISA card you can get a 20% discount. When we bought it the price was 279NOK instead of 369NOK, quite a difference!

Also Pastor Ivy and her husband Glen from Toronto came to Oslo to visit us! Though because I have been busy with summer camp work and she has been busy with church activities with the adults, we haven’t met as often as last time she visited. Though she’ll be here for a few weeks after camp too, so we will probably meet up at least a few times then.

Well then, time to head for bed. Next time for sure I will blog before a month has passed! Maybe.

Leave a comment
← Cruising on the Mediterranean Sea
Camps and stuff →