Netflix is out in Norway!

Netflix was recently released in Norway, and I’ve been watching lots of TV shows in the background while surfing and doing other stuff on the computer (even while playing games!) Although there was an article in the Norwegian newspaper criticizing the terms of use for Netflix, stating that you’re not allowed to sue them or so, I’m not too worried. Maybe I’m not paranoid enough…

The other most common complaint I see from other users is that it does not have the newest seasons of the popular TV shows. However, there are lots of somewhat older shows that I haven’t watched yet, so watching them should keep me occupied for quite a while. I might also subscribe to HBO Nordic once that service is available in Norway, though I guess the only show there I really am following is Game of Thrones.

All in all, I am pretty happy with Netflix so far, and will probably keep the subscription after the free month is over!

Since my last blog post I haven’t done much travelling, except I went on a cottage trip with my family.

It was cozy and relaxing, though somewhat boring, wasn’t so much to do there. They did have a sauna and an outdoors whirlpool, but the whirlpool wasn’t really that impressive, and the sauna was very small and strangely designed. Instead of having two sets of benches shaped like “stairs”, one of the benches was placed directly above the other, like a bunk bed… I tried to lie on top, but it felt uncomfortable because it felt like if I was careless when climbing down, I’d slip and fall on top of the sauna oven.

I tried taking 3D photos again on this trip with the 3DS, and the photos and videos does work nicely on my 3D computer monitor. But the quality is absolutely horrendous! I’m thinking of buying an actual 3D camera. Unfortunately they never got all that popular, so there aren’t any new models. Well I guess an old model is okay as long as I can find someone selling it…

Although I’ve not been travelling much, Anna and Jun Wen came to visit one weekend, so we walked around Oslo and had dinner together. Kakee also visited. It occurs to me that I forgot take any photos with them again! I always forget to take photos when visiting or being visited by friends, I almost don’t have any new photos of me with any of my friends. Sucks. My friends might have some photos, but I also forget to ask them about it. *sigh* Well just to add a photo, here’s one from a dinner I had with Kakee at T.G.I. Friday’s in Oslo: 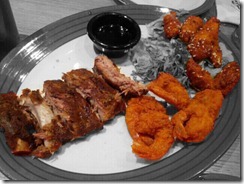 We had something called the Iron Game at A.L.I.V.E., where we were running around a shopping center doing tasks to get points. It was quite fun! Although somewhat embarrassing. My team didn’t win, but got a good second place.

I have been trying to play through the games I’ve got and not buy new ones, the last two months I finished Crysis 2 (didn’t like it as much as the first one, though playing in 3D was neat), Assassin’s Creed 2 (great game! Started playing on Brotherhood too now.), Theatrhythm: Final Fantasy (bought it mostly because it was cheap, kind of fun to play through Final Fantasy songs, but don’t really feel all that compelled to keep playing after playing the “final boss”), Zelda: The Minish Cap (one of the free games I got because I bought the 3DS early. Tried to get 100% completion on it, but apparently I missed the light arrows…), ICO & Shadow of the Colossus (really liked these two games, even though the graphics do seem somewhat dated. PS3 3D worked on my 3D monitor!), and I finally beat Another World on my phone (turns out the reason I got stuck is because I tried to go somewhere before I had finished everything I was supposed to do in an earlier area) and Battleheart (turns out the boss I got stuck at was the final boss! Managed to take it down after grinding a bit more).

Currently I’m unreasonably addicted to Space Pirates and Zombies that I got off Humble Bunde 6. (The current Humble Bundle is actually for some e-books and comics, in case you’re interested. Still three days left as of now.)

SPAZ is an indie space shoot’em-up RPG, where you start out with access to only really weak space ships. To get access to more ship designs you need to destroy certain amounts of that ship type. Each ship type have different “equipment slots” allowing you to equip different kinds of weapons and upgrades. There’s a slot type that can only be used for cannon/beam type weapons, one for launcher/rockets and one for bombs/mines, for example. You can buy weapon and upgrade designs from space stations, once you’ve bought a design you can use it as many times as you want. As you gain levels you can upgrade different stats (research) like cannon, launcher, armor, shields, and these stats are also important because certain weapon/upgrade designs require higher levels of that stat to equip. (Hence the reason I call it a RPG, even though their website never uses that term.) And you can have 2 – 4 different space ships in play at the same time (depending on how far you’ve gotten in the story).

Admittedly, the graphics are decent but not ground-breaking, the music and missions are quite repetitive, and the story is hardly particularly unique or deep. I guess what I like about the game is how I can customize each space ship, and trying to get new (and bigger) ship designs from other enemies. It feels great whenever you get a new ship and can try it out!

Oh also there are “zombies” in this game that can take over your ship if you’re not careful. Kinda annoying when that happens. And since we’re talking about zombies: I’ve been watching “The Walking Dead” on Netflix. Unfortunately Netflix in Norway only has the first season (only six episodes? Whyyyyy??)

Leave a comment
← Camps and stuff
RE6, Bergen, Stockholm, surgery →